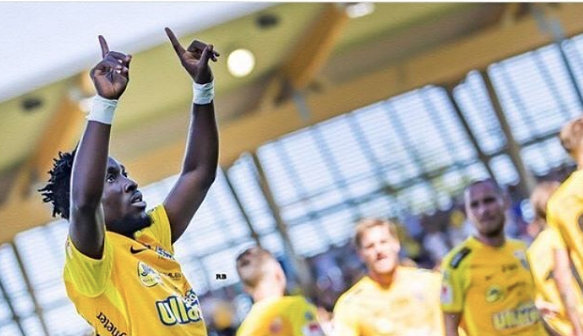 It was a good outing for Nigerian players on parade in the Swedish Cup as the trio of Chisom Egbuchulam, Moses Ogbu and Henry Offia were all on target when their respective clubs progressed to the next round of the competition, AOIFootball.com reports.
Chisom Egbuchulam: The attacker got a brace for Falkenbergs FF as they dispatched Skoftebyns IF 4-1 away from home to progress to the next round.
Zlatan Krizanovic had put the away side ahead after three minutes before Chisom doubled their lead in the 15th minute, with Robin Östlind making 3-0 on the 23rd minute as they went into the break on a high.
Egbuchulam then got his brace and his side’s fourth just on the hour mark, before a late consolation ensured Falkenbergs held on for a convincing win.
Moses Ogbu and Henry Offia: Both players were on target for IK Sirius as they defeated Stromsbergs IF 4-0 away from home in Sweden, Svenka Cupen.
Ogbu opened scoring for his side after 21 minutes before been withdrawn for Henry on the hour mark with IK Sirius already three goals up after Ian Sirelus (40) and Charber Georges (44) added to Ogbu’s opener.
Henry Offia did, however, put the icing on the cake, as the 18-years old swiftly fired home to complete a resounding victory for the visitors.

Our target is to avoid relegation -Remo Stars