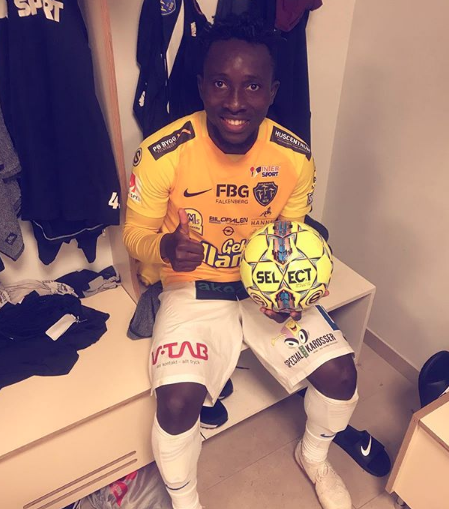 Nigerian forward, Chisom Egbuchulam continued his impressive form in Sweden, scoring his 5th goal in less than five days, after netting a hat-trick for Falkenberg FF as they made light work of Dergerfors IF, AOIFootball.com reports.

The ex-Rangers of Enugu striker scored twice midweek to help his team into the next round of the cup. He, however, improved that mark by adding one more as he continues to push for a return to the national team.

Karl Sodertson opened scoring for the home side after five minutes before Egbuchulam turned the match to his own, scoring twice in the 8th and 27th minute as Falkenberg went into the half 3-0 up.

The away side did, however, pull one back after Kevin Wright made it 3-1 just before the hour mark, but Egbuchulam was not to be denied his hat-trick when he converted from 12 yards on the 70th minute to earn himself the match ball.

With his hat-trick, Egbuchulam has now scored nine league goals this season, ranking him fourth on the race for the golden boot just two goals behind overall leader Sargon Abraham who has 11 goals.

We have a strong bond with Rangers players, says Ezeaku