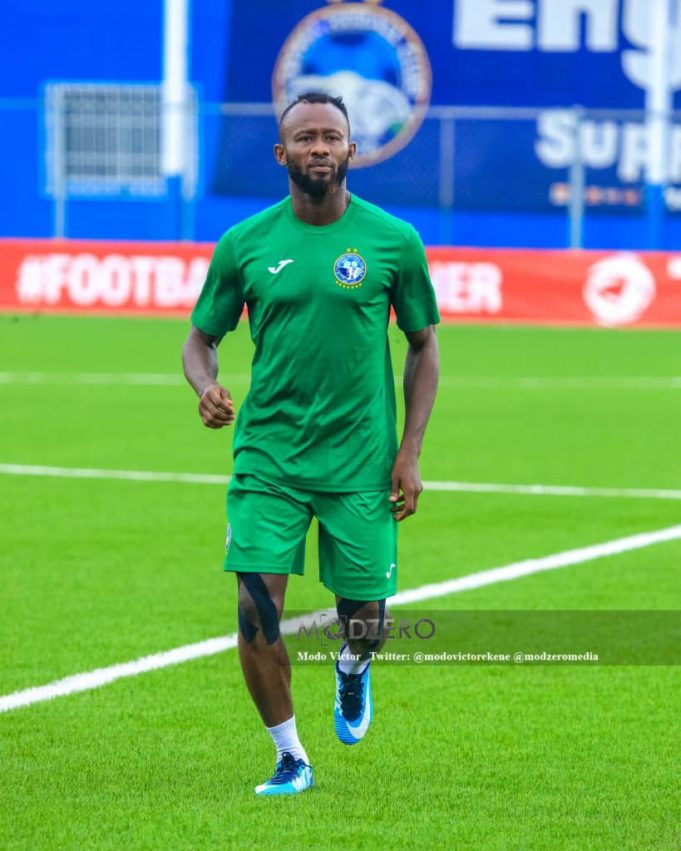 Enyimba of Aba Captain, Mfon Udoh has expressed excitement over his team’s qualification into the quarterfinals of the CAF Confederation Cup, AOIFootball.com reports.

The People’s Elephant defeated CARA Brazzaville of Congo 1-0 in front of their Aba fans on their home return after three years.

Speaking to AOIFootball.com, Udoh said he was happy and thankful to God for the quarterfinals berth.

“Well it was a great feeling. It wasn’t as easy as we thought. To God be the glory that we scaled through with a narrow win. We are very happy about it.

Enyimba who lost 3-0 to CARA in the first leg, were better on the day, piling consistent pressure on the visitors. Udoh however, hailed the consistency of the team during the game.

“I think we were consistent in the game. We never gave up even when it seemed all hope was lost; we kept our cool, kept on mounting the pressure and we kept on believing and at the dying minute, we got the goal,” Mfon said.

As CAF holds the draws for the Quarterfinals on Monday, Udoh stated that they are not scared of any team, noting that his side will have to work harder.

“Well, we are not scared of any team. Any team that comes we will play; we just need to work extra hard because the higher you go the tougher it becomes. The quarterfinals will be a different ball game; it’s going to be tougher and we need to train hard; we need to be committed and focused. I think that is just what we are going to do,” Udoh concluded.

Udoh was the highest goals scorer in the 2016 edition of CAF Champions League but has played only thrice for Enyimba after returning from a long-term injury.

Simy Nwankwo vows to return Crotone to Serie A