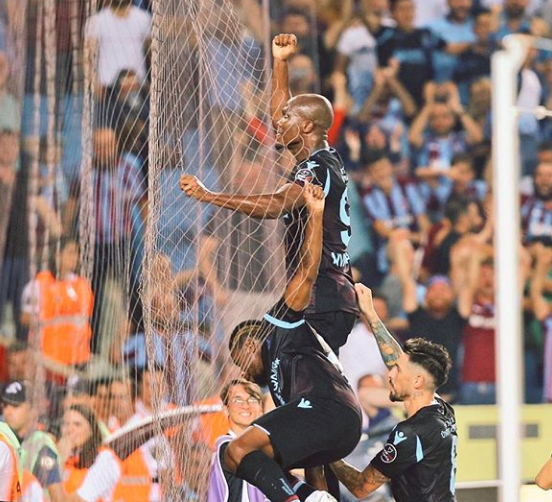 It was an amazing weekend for Eagles’ striker Anthony Nwakaeme as he announced himself to the Trabzonspor fans in grand style, while Onazi and Ogu also gave Rohr a little selection headache ahead of next week’s clash against Seychelles.

However, Rohr will have to assess the duo of Alex Iwobi who missed Arsenal’s game on Sunday due to illness and Jamilu Collins who was taken off injured during his team’s game.

Victor Moses: He was not listed for the second consecutive game when Chelsea defeated Bournemouth 2-0 to maintain their perfect start to the EPL season.

Alex Iwobi: The Eagles’ forward was missing for the Gunners due to ill-health when Arsenal defeated Cardiff City 3-2 away.

Kelechi Iheanacho and Wilfred Ndidi: Ihenacho came off the bench to bag an assist for Leicester City, while Ndidi was on for the entire match duration when they lost 2-1 to Liverpool at the King Power Stadium on Saturday.

Isaac Success: He came off the bench in the 70th minute for Andrey Gray as Watford maintained their winning start to the season with a 2-1 win over Tottenham.

Leon Balogun: He was on the bench for the entire match duration as Brighton battled back from two goals down to hold Fulham 2-2 at home.

Oghenekharo Etebo: He was on for 81 minutes before being replaced by Bojan Krkric as Stoke City lost 2-1 away at West Bromwich Albion.

Semi Ajayi: He was on for the entire match duration as Rotherham United lost 1-0 away at Wigan Athletic.

Abdul Ajagun and Imoh Eziekel: Eziekel came off the bench in the 56th minute, while Ajagun was rooted to the bench for the entire duration as KV Kortrijk drew 3-3 at home Genk.

Emmanuel Dennis: He was on target for Club Brugge, netting his second league goal of the campaign as they dispatched SV Zulte Waregem 5-2 on Friday night.

Uche Agbo: He was on the bench for the entire match duration as Standard Liege suffered their first loss of the season, going down 2-1 away at KAS Eupen.

Yusuf Odubanjo: He was on for 71 minutes and helped LASK Linz to a comfortable 2-0 victory over Wolfsberger AC.

Emeka Eze: The youngster saw just eight minutes of action for Sk Strum Graz as they were held 1-1 at home to Rapid Wien.

Stephen Eze: The lanky defender was in action for the entire match duration when Lokomotiv Plovdiv drew goalless away at Botev Vratsa.

Odion Ighalo: He was on for the entire match duration when Changchun Yatai drew 1-1 away at Henan Jianye.

Mikel Obi: The Eagles’ captain returned to action for Tianjin Teda but could not inspire them to victory as they lost 2-0 away at Guangzhou R&F.

John Owoeri: The 31-year-old was on target for Shanghai Shenxin as they lost 2-1 away at Meizhou Hakka in the Chinese Second Division.

Eziekel Henty: He was on for 49 minutes before being replaced by Tomislav Strkalj as NK Osijek continued their impressive start to the season with a 2-1 win over NK Lokomotiva Zagreb.

Theophilus Solomon: He was on the bench for the entire match when NK Inter Zapresic defeated NK Rudes 3-0.

Ubong Ekpai: He was introduced on the hour mark but could do little to stop Viktoria Plzen from losing 4-0 to Slavia Praha.

Paul Onuachu and Frank Onyeka: Both players started for Midtjylland as they drew 2-2 away at Brondby IF.

Samuel Kalu: He was on for the entire match duration as Bordeaux continued their unimpressive start to the season, losing 2-0 away at Stade Rennais.

Jamilu Collins: The Eagles’ new invitee was withdrawn in the 84th minute of SC Paderbon 2-2 draw at home to VFL Bochum after picking up an injury in the encounter.

William Troost-Ekong: He was on for the entire match duration as Udinese suffered their first loss of the season, going down 1-0 away at Fiorentina.

Ola Aina: The Eagles’ wingback impressed on his first start for Torino as they claimed their first victory of the season, defeating visiting SPAL by a lone goal.

Aina was withdrawn after 84 minutes, earning a game rating of 7.2.

Joel Obi: The midfielder was on for 82 minutes as Chievo Verona earned their first point of the season, drawing goalless at home to Empoli.

John Ogu: The Eagles’ midfielder was on target for Be’er Sheva as they were held to a 1-1 draw at home to Maccabi Tel Aviv.

Tosin Aiyegun and Abdullahi Alfa: Aiyegun was on target for Ventspils as they defeated Rigas Skola 2-0, while Alfa was withdrawn after 54 minutes of the match.

Afeez Aremu and Adeleke Akinyemi: Both players were on parade as IK Start forced Kristiansund BK to a 1-1 draw away from home.

Matthew Ifeanyi and Chidera Ejuke: Both players went up against each other but it was Ejuke who smiled home as his side Valerenga defeated Lillestrom 1-0 away from home.

David Babajide and Anthony Ikedi: Babajide was on for the entire 90 minutes while Ikedi was introduced after the hour mark as they both suffered defeat with Haugesund, losing 1-0 away at Rosenborg.

Chidozie Awaziem: The Eagles’ defender was not listed for FC Porto as they trashed Moreirense 3-0.

Kelechi Nwakali and Yahaya Muhammad: Both players were on parade as FC Porto B earned their first win of the season, edging out Academico Viseu 2-1.

Sylvester Igboun: He was on for the entire match duration as FK Ufa lost 2-1 away at Akhmat Gronzy.

Bryan Idowu: The Eagles’ left-back was rooted to the bench when Lokomotiv Moscow fell 2-1 away at FK Krasnodar.

Chima Akas: The Eagles’ left-back was in impressive form as he bagged a man of the match award in Kalmar FF’s 1-1 draw away to IF Elfsborg.

Stephen Odey: He was on for the entire match duration as FC Zurich lost 1-0 away to FC Lugano.

Blessing Chibuike Eleke: The striker scored his second goal of the season to help FC Luzern to a 2-1 victory over Grasshopper Club Zurich.

Henry Onyekuru, Ogenyi Onazi, and Anthony Nwakaeme: All three Nigerians were on parade, but it was Nwakaeme and Onazi that stole the show as they were both on target to help Trabzonspor to a befitting 4-0 victory over Onyekuru’s Galatasaray.