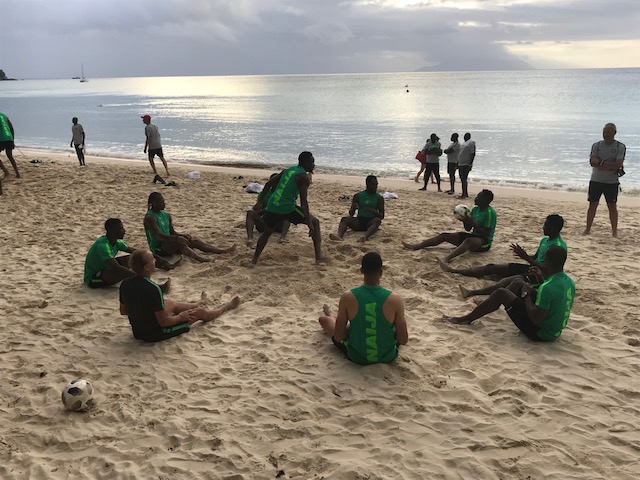 The camp of Nigeria’s Super Eagles has come very much alive in Victoria, Mahé Island in Seychelles following the arrival of six more players on Tuesday afternoon, which brought the number of players at the team’s Savoy Hotel Resort and Spa to 18.

In the afternoon, Saudi Arabia -based Ahmed Musa, alongside Turkey –based Ogenyi Onazi, China-based Odion Ighalo, Germany –based Jamilu Collins and the England –based duo of Oghenekaro Etebo and Leon Balogun arrived camp and joined the team for lunch.

Goalkeeper Ikechukwu Ezenwa (from Nigeria) and Daniel Akpeyi (from South Africa) were being expected to arrive camp before dinner.

The development means the technical crew can concentrate on the training sessions ahead of Saturday’s game, without any worries over the forced withdrawals (due to injury) of Alex Iwobi, Olaoluwa Aina, and William Ekong.

The Super Eagles look to garner all three points against the Pirates on Saturday to restore their 2019 Africa Cup of Nations qualifying campaign back on track following the reverse against South Africa in Uyo on Matchday 1 in June 2017.

Nigeria should not expect easy ride to Russia – Troussier