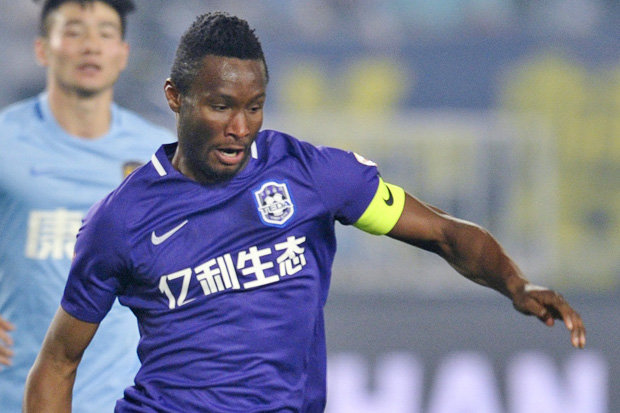 Super Eagles’ captain, Mikel John Obi was on for 90 minutes but could not help Tianjin Teda from being ruthlessly spanked 5-2 by visiting Shanghai SIPG, AOIFootball.com reports.

Mikel started his 28th league game for the Tianjin-based outfit but could not inspire them to victory, with his former teammate Oscar running the show for the visitors.

The home side took the lead after five minutes when Jonathan scorer to make it 1-0 but the lead was quickly forgotten after strikes from Lei Wu (12’) and Oscar (42’) ensured the visitors went into the break ahead.

The second half resumed with the same tempo as the first with Hulk making it three on the hour mark before Elkeson made it 4-1 and Oscar completing his brace to make it 5-1 to Shanghai.

Teda did however pull a goal back when Yuanyi scored with 10 minutes of regulation time left to make it 5-2.

Mikel was on for the entire match duration and had an above average performance with a game rating of 6.3, completing 83% of his passes, making two clearances and winning three of his 5 duels contested.

The loss leaves Tianjin Teda without a win in 5 consecutive outings as they drop to 10th on the table with 26 points from 22 games.