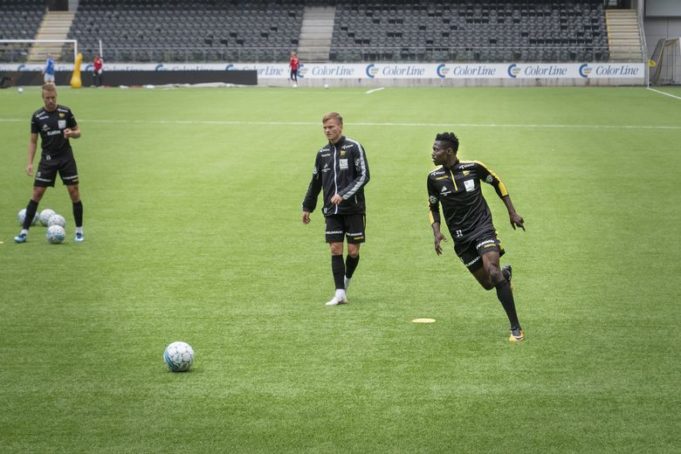 Nigerian forward, Adeleke Akinola Akinyemi scored his first goal for Norwegian club IK Start as they climbed out of the relegation zone with an impressive 3-0 win over Lillestrom with Afeez Aremu chipping in an assist, AOIFootball.com reports.
The 19-year-old striker joined the club last month from Latvian side FK Ventspils following his impressive form with the club as he hopes to force his way into the national team.
The hosts took the lead after five minutes when Aremu and Akinola combined, with Akinola firing home to put his side ahead.
IK Start doubled their lead after 20 minutes from the penalty spot after Marius Amundsen was given his marching orders following a professional foul, with Kevin Kaban stepping up to convert the resulting kick.
Akinyemi was replaced on the 75th minute for Mathias Bringaker with the forward putting the icing on the cake scoring the third goal three minutes after his introduction to hand IK Start all three points.
Akinyemi had a game rating of 7.0, completed 67% of his passes and won five of his 9 duels contested, whilst Aremu who was on for 82 minutes had a game rating of 75%, winning 2 duels and making two clearances.