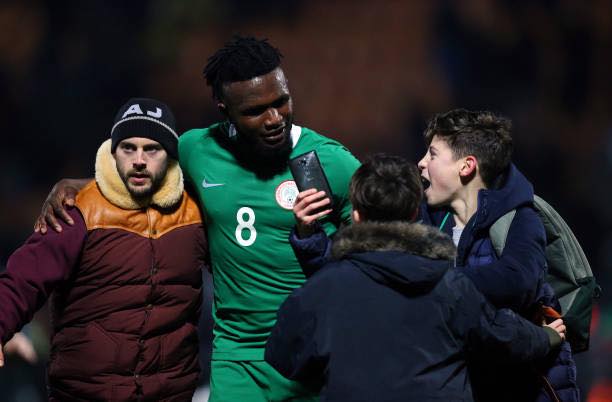 Former U-17 World Cup- winning striker Isaac Success has been handed a recall to the Super Eagles, 18 months after making his debut in a match against Senegal in March 2017, AOIFootball.com reports.
AOIFootball.com can authoritatively confirm that the player had put in so much work to improve his fitness to ensure he returns to live his dream of playing for Nigeria at a senior tournament.
Success burst into limelight at the 2013 FIFA U-17 World Cup in UAE, scoring a spectacular goal against Sweden in the group stages before injury cut short his tournament.
Struggling to replicate his early form at youth level, he took a new approach to the new season on his return on loan from Granada, first employing a personal trainer before also going on to add a fitness trainer to help improve his fitness level.
“For me, I’m not surprised that he has been called up for the game against Libya because he (Success) put a lot of effort to improve his fitness during preseason and its already paying off, he’s already getting more playing time with Watford this season,” a close friend to the player disclosed
The 22-year-old former Granada youth prodigy did not just stop at improving his fitness and overall play, he also did put in more effort in training to ensure he keeps to shape and avoid injuries that have been troubling his career for the past few season.
The player’s form this season shows his new training regime has already started yielding fruits, as he scored in both of Watford’s EFL Cup matches this season against Reading and Tottenham.
Despite not starting a game yet for the Hornets, he has been an integral part of the squad, featuring in all 7 of their fixtures in the Premier League to help the club stay 6th on the log with 13 points.
The Watford star will be looking to add to his one senior cap against Libya. He got his first call-up for Nigeria under Gernot Rohr for a 2018 FIFA World Cup qualifier against Zambia in October 2016 but did not feature before making his debut on 23 March 2017, coming on as a substitute in a 1–1 draw against Senegal at The Hive Stadium in London.