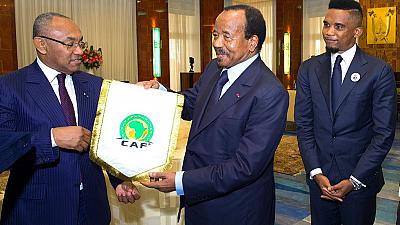 President of the Confederation of Africa Football, Ahmad Ahmad has assured the President of Cameroon, Paul Biya of the confederation’s support to ensure the Central African nation hosts the Africa Cup of Nations in 2019, AOIFootball.com reports.
Ahmad was at the Palace of Unity to meet with the Cameronian number one citizen alongside former Cameroon legend and African footballer of the Year, Samuel Eto to reassure Cameroon of CAF full support.
“CAF has never thought about a CAN withdrawal in Cameroon,” he said, explaining that it is Cameroonians who tarnish the image of their country.
He then indicated that the President Paul Biya gave him “the assurance that Cameroon will be ready for the tournament”.
The discussions then focused on the various points of the preparations. The President of CAF presented to the Head of State the current state of progress of the work and that which provides for the terms of reference of the CAF.
“And that,” he explained, “is not to complicate things but to protect the sport and the players so that they evolve in a maximum of serenity.”
Regarding the future of the CAF Centre of Excellence in Mbankomo, President Ahmad said that President Paul Biya has agreed to the purchase of this infrastructure by Cameroon to offer it to youths.
He welcomed the decision of the Head of State and promised, despite the rules of competitive bidding, that Cameroon, which owns part of the land, will be favoured in the acquisition process.
The CAF President finally thanked Samuel Eto’o for making the long-awaited visit to Cameroon was made possible.

I will work harder to make World Cup squad- Alampasu