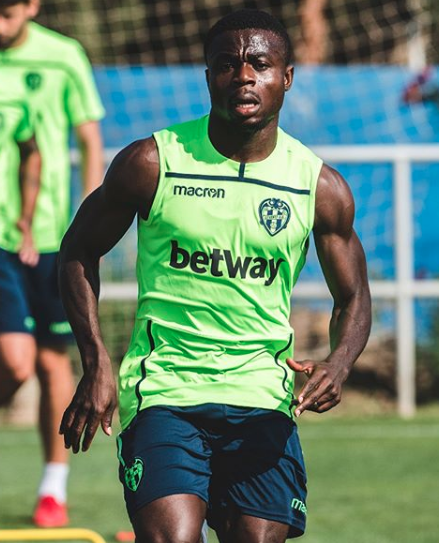 Super Eagles’ winger, Moses Simon will be hoping to get his first start for new club Levante when they travel to Getafe on match day eight of the Spanish LaLiga, AOIFootball.com reports.
The Eagles’ star, who only recently returned to full fitness, has been a regular from the bench in Levante’s last three games as they hope to record their third win against Getafe on Saturday.
The Nigerian was credited with Levante’s second goal in their 6-2 bashing of Sevilla and will be hoping his impressive form off the bench convinces the coach to give him a starting berth, especially with the international break less than seven days from now.
The 23-year-old has had an impressive game rating of 6.87 thus far, completing 57% of his passes, winning 67% tackles and also winning an above average of 57% of his duels despite not being the tallest among defenders.
Levante currently occupies the 16th position in the 20 team standings with 7 points from the opening 7 games and will be hoping they make it back to back wins for the first time this season.