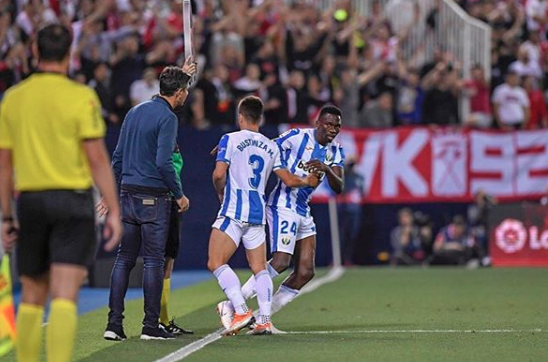 In what is arguably one of the best weekend for Gernot Rohr and his players going into next week’s doubleheader clash against Libya, Super Eagles’ defender Kenneth Omeruo made his first competitive appearance for Spanish LaLiga outfit CD Leganes as they defeated Rayo Vallecano 1-0 at home, AOIFootball.com reports.
Omeruo, who was initially named on the bench for the clash, was called on earlier than expected after the injury to Unai Bustinze provided the Nigerian with an opportunity to make his debut.
He, however, did not disappoint as he helped guide his side’s 1-0 lead, thus earning Leganes their second victory of the season, which momentarily lifts them off the foot of the table to 18th.
“#cdleganes 1- 0#rayovallecano. Glad to make my debut in win…Vamos leganes,” the Chelsea loanee posted afterwards.
Omeruo will now turn his attention to the national team. He was on the pitch for 61 minute, earning a game rating of 6.8, making 6 clearances, 2 interceptions and completing 58% of his passes.

Emmanuel Ariwachukwu delighted with good start to life in Sudan