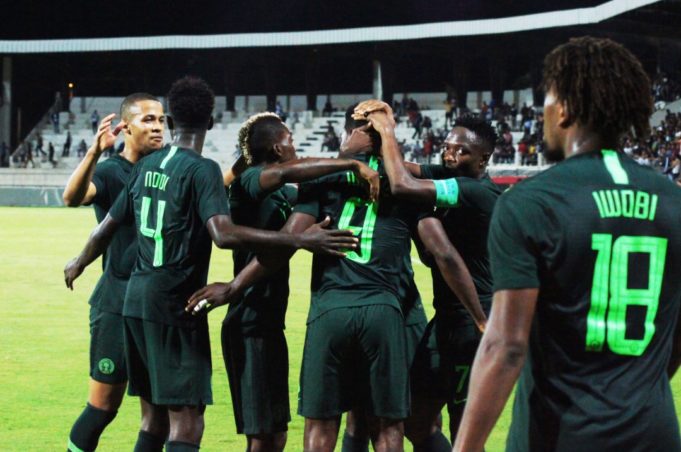 Super Eagles’ and Changchun Yatai forward, Odion Ighalo was again the star for the team as he followed up on Saturday’s hat-trick by scoring a brace in Nigeria’s 3-2 win over Libya in Sfax on Tuesday evening, Aoifootball.com reports.
The former Watford forward came into the game in arguably his best form for the national team since his debuted and rightfully put Nigeria ahead after 13 minutes after benefitting from a good exchange between Iwobi and Musa with the latter providing the assist for Ighalo to score his fifth goal in the qualifying series.
Few minutes later, Ighalo returned the favour, releasing Musa who scrambled home Nigeria’s second after going past three markers before slotting the ball into the net.
The momentum soon shifted to the Libyans who tested Uzoho a couple of times before their persistence paid off when Saltou combined with Zubya to half the deficit before the halftime break.
The Libyans, however, came into the second half with more desire and purpose and deservedly pulled level when midfielder Benali fired home a rebound in the 74th minute after Uzoho had initially saved the first effort on goal.
Nigeria did, however, have the final say in the clash when in-form striker Odion Ighalo got his fifth goal within the space of three days, firing home after expertly dummying two Libyan players before placing the ball beyond the reach of the goalkeeper to earn Nigeria all three points.
The win now moves Nigeria to top of Group E with 9 points while South Africa drop to second with 8 points after their goalless draw away at Seychelles earlier in the day.