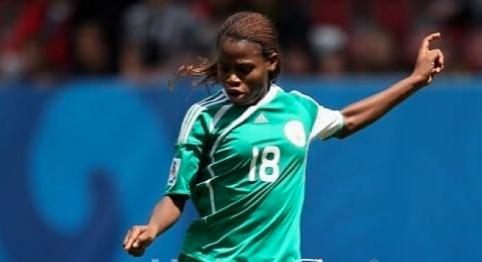 Super Falcons’ new invite, Charity Adule has said she will bring something new to the team as she’s not in competition with anyone, AOIFootball.com reports.
Speaking in an exclusive chat with aoifootball.com, the BIIK Kazygurt midfielder said:
“I feel happy and honoured to be invited to the Super Falcons; it has always been my dream to play for the senior national team having featured for the U-20.”
The former Rivers Angels forward expressed her gratitude to the Swedish gaffer, Thomas Dennerby for giving her the opportunity.
“I want to use the opportunity to thank Thomas Dennerby and Maureen Madu for the opportunity and I promise to give my all for my country”.
Speaking further on what she intends to bring to the team, Adule said:
“Well, as a player I hope to bring in new things to the team and by the grace of God it will help the team to greater heights and greater achievement.
“I am not coming to the team to compete with anybody. I have respect for all the invited players but I believe in myself and ability and I believe my inclusion into the team will help the coach to achieve his set objectives”.
The Delta state born midfielder who started playing football when she was a little girl with boys in the street and turned professional in 2006, said perpetual Nkwocha is her role model.
Like every other career, football has its unique challenge and is often more challenging for the female folks, however, Adule said her passion for the game of football formed her choice of the career.
“I choose football as a career because I love football and I have passion for it.
“I will not say I prefer Nigeria to be paired with any country because I know  Nigeria has a good team so we can conquer any team in Africa by the grace of God,” Adule concluded.
Draws for the 2018 Women AFCON group matches will hold in Accra, Ghana on Sunday,  October 21.

Eaglets will use Turkey tournament to shape up for AFCON, says Manu Garba

Russia is home for me, says Ahmed Musa