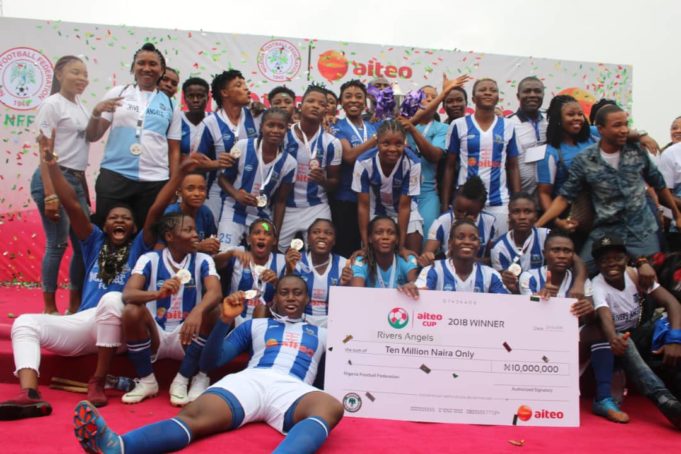 Defending champions Rivers Angels have successfully defended their Aiteo Cup title after overcoming Ibom Angels 1-0 at the Samson Siasia Stadium in Yenogoa, Aoifootball.com reports.
Juliet Ibrahim’s lone strike in the 47th minute was sufficient to consign Ibom Angels to a second successive final defeat while Rivers Angels secured a third consecutive title and a record-extending eighth overall.
In what was a repeat of last year’s final in Jos, both sides approached the game with caution with few scoring chances in a match which was witnessed by the Governor of the State Seriake Dickson in attendance, NFF President Amaju Pinnick and Super Falcons Coach, Thomas Dennerby.
Ibom Angels thought they had taken the lead when Emem Essien put the ball in the net in the 36th minute but it was ruled out for offside and both sides went in level at halftime.
However it was Rivers who broke the deadlock two minutes after the interval when Juliet Sunday bundled home to hand them the lead much to the joy of the visiting fan’s.
Despite a late onslaught from Ibom Angels, the girls from Rivers kept their cool as they claimed their third consecutive cup victory.