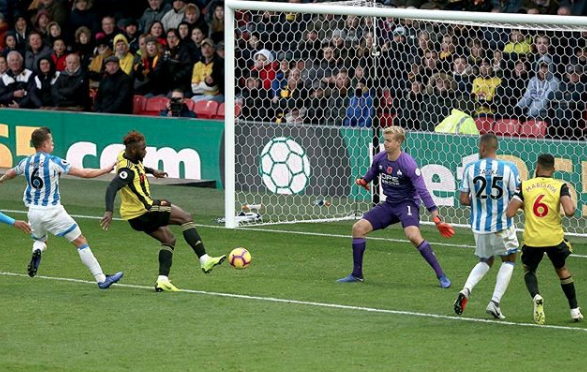 Super Eagles forward, Success Isaac scored his first goal of the season as Watford ensured Huddersfield’s wait for their first Premier League win of the season continues after a 3-0 defeat at the Vicarage Road, AOIFootball.com reports.
Roberto Pereyra gave Watford the lead with a superb solo goal in the 10th minute and Gerard Deulofeu made it 2-0 with a fine individual effort of his own nine minutes later.
Huddersfield had a few good opportunities to respond in the first half, with Philip Billing hitting the woodwork from a distance.
But Isaac Success sealed Watford’s victory when he tapped in with 10 minutes left to register the Hornets’ sixth Premier League win of the campaign as Huddersfield’s second-season struggles go on.
Success was withdrawn after his goal and had a game rating of 8.0, completed 69% of his passes, won 100% of his tackles and also won 10 of his duels contested.
The result means Watford stay in seventh on 19 points. Huddersfield, meanwhile, drop down to bottom 20th.