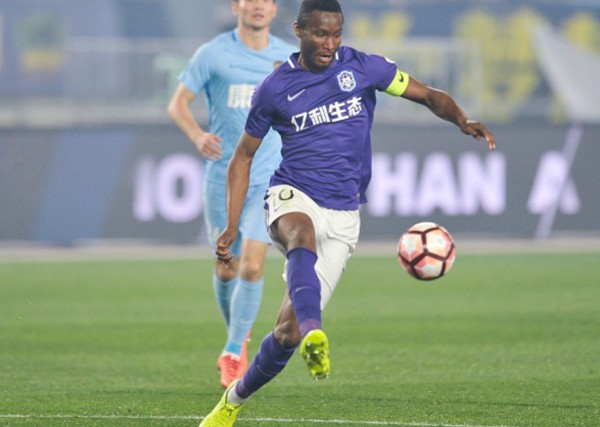 Super Eagles’ captain, Mikel John Obi scored his second goal of the season for Tianjin Teda as they continued their downward slide on the league table, losing 4-2 at home to Shanghai Shenhua, AOIFootball.com reports.
Mikel started his 18th league match of the season but it was the away side that drew first blood when Giovanni Moreno converted after 14 minutes to put Shanghai one goal up.
Mikel then equalised for the hosts eight minutes later to draw his side level before Ghanian forward Frank Acheampong put Tianjin ahead on the 39th minute to bring scores to 2-1.
The Ghanaian then had a chance to extend his side’s lead few minutes later but missed from 12 yards with Shanghai equalising just on the dot of half-time via the boot of Jianrong Zhu.
The second half was, however, a one-sided affair with the away side retaking the lead with Jianrong Zhu completing his brace on 86 minutes before Colombian striker Fredy Guarin wrapped up the resounding victory.
Mikel was on for the entire 90 minutes, with a game rating of 7.3, completing 69% of his passes, making 1 key pass, completing 100% of his dribbles and tackles and winning six of his duels contested.
The result leaves Tianjin on the brink of relegation on 14th position with 28 points after 27 games, three points above the drop zone with just three games left in the season.