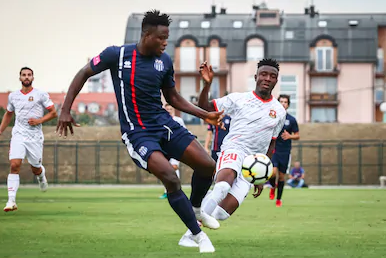 Nigerian forward, Iyayi Believe continued his fine form in front of goal, scoring in his fourth successive league match to help 10-man Gorica to a 1-1 draw at home to HNK Hajduk Split in the Croatian League, AOIFootball.com reports.
The 22-year-old forward started his 13th league game of the campaign, putting his side ahead with just 14 minutes in the match after nutmegging his first marker before running past six players to slot home.
The lead was however cut short two minutes after the hour mark by Jairo Da Silva who drew the visitors level before Gorica were reduced to 10 men just before the half-time whistle.
Former Sunshine Stars of Akure defender, Godfrey Oboabona was then introduced at halftime, replacing Damir Zutic and he helped shot out treats from their opponents with both teams settling for a share of the points after the blast of the final whistle.
The result leaves Gorica 4th on the log with 23 points from 13 games, 10 points behind leaders Dinamo Zagreb who have 33 points from the same number of matches played.

My target is to win AWCON title with Falcons, says Dennerby