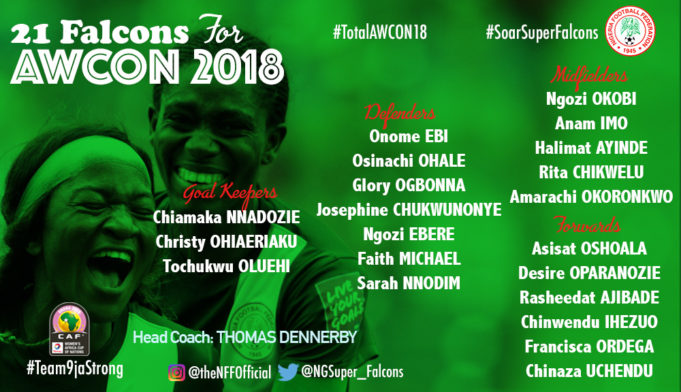 The Nigeria Football Federation,  NFF has announced the list of 21 players who will fly Nigeria’s flag at the 11th Women’s Africa Cup of Nations finals in Ghana, AOIFootball.com reports.

The players dropped from the initial 23 released on Monday are Ugochi Emenayo and Ogonna Chukwudi.

The championship starts next week, with holders Nigeria heading Group B of the competition to contend with South Africa, Zambia, and Kenya.

The eight-time champions are presently at the Sol Beni, Abidjan, (the  Academy of 1998 African champions ASEC Mimosas FC) for an eight-day final camping.

The team will depart for Ghana on Wednesday, November 14.

Nigeria takes on South Africa on November 18, before matches against Zambia and Kenya in Cape Coast.

Hosts Ghana, Algeria, Mali and Cameroon will battle things out in Group A in Accra.