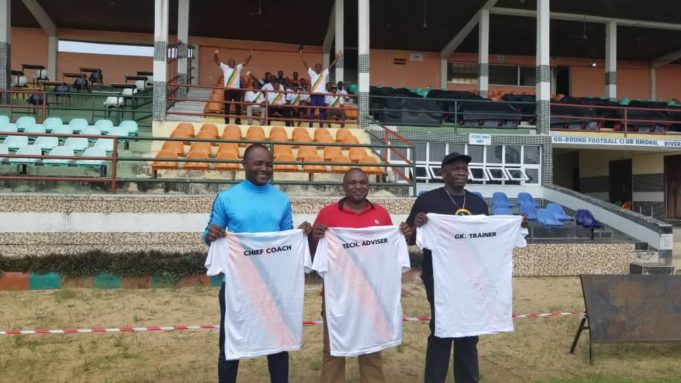 Go Round FC have unveiled new coaches to pilot its affairs for the 2018/2019 Nigeria Professional Football League season, AOIFootball.com reports.

Willy Udube, who joined the club mid-last season as chief coach has been upgraded to Technical Adviser following the departure of Ngozi Elechi to Yobe Desert Stars, while Justin Smart who was at Port Harcourt-based amateur side, Cynosure FC, is now the chief coach of the club.

David Dosu is goalkeeper trainer after he left First Bank FC to Omoku while Willy Udube had earlier coached at Heartland FC, Gabros, Rivers United, and Nnewi United before joining Go Round FC.

Udube, however, believes his performance as the chief coach in the outgone season was what made the management pick him as Technical Adviser.

“I am very impressed that I have people like the Team Manager and other members of the crew. I was unveiled some months ago as the chief coach of this team and I know quite well that because of our performance I was upgraded to this position,” Udube said after his unveiling.

As a player, Justin Smart featured in goal for Sunshine Stars, Sharks and was part of the 2004 Dolphins side that won the League and Cup double.

Justin Smart told the media that he believes he can achieve a lot at Go Round FC.

“Originally, I never expected this but then for the Team Manager to have believed in me, I also believe I can do a lot here.

“Go Round FC is a big team and I know that with what is on the ground, the sky will be our beginning,” Smart said.