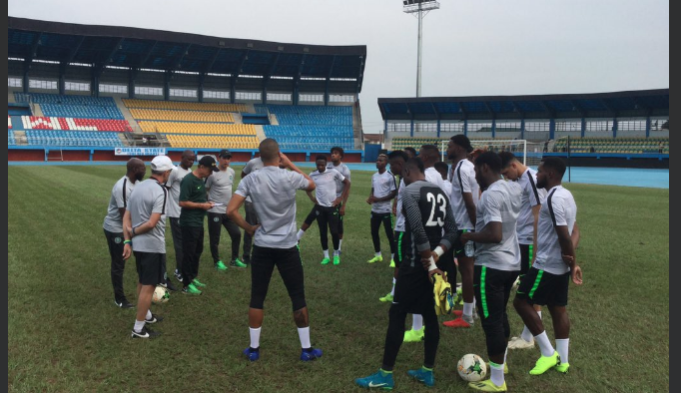 The Super Eagles of Nigeria will continue their preparation for Saturday’s crucial AFCON 2019 qualifiers against the Bafana Bafana of South Africa in Johannesburg, with the team expected to train behind closed doors on Wednesday, AOIFootball.com reports.

Having held its first training session on Tuesday evening with 22 players exempt Samuel Kali who is being expected before the Wednesday session.

Rohr will, however, try to use the session to determine who starts for the country on Saturday, especially with injury and suspension creating a vacuum in three vital departments of the team.

“We will have only one training session on Wednesday at the Stephen Keshi Stadium, Asaba…and it will be closed! We apologize for and regret all inconveniences caused by our change of plans. Please bear with us,” the team’s official Twitter handle read.

Delta State governor, His Excellency Governor Ifeanyi Okowa has promised to give the team a sum of 25 thousand dollars for every goal they score in South Africa, whilst charging the team to be steadfast and defend the colours of the nation.

Three-time champions Nigeria will travel to the FNB Stadium in Soweto, knowing that a win or draw will guarantee them a place in next year’s final whilst South Africa, on the other hand, need an outright win to layoff Libya from having a chance of reaching Cameroon.