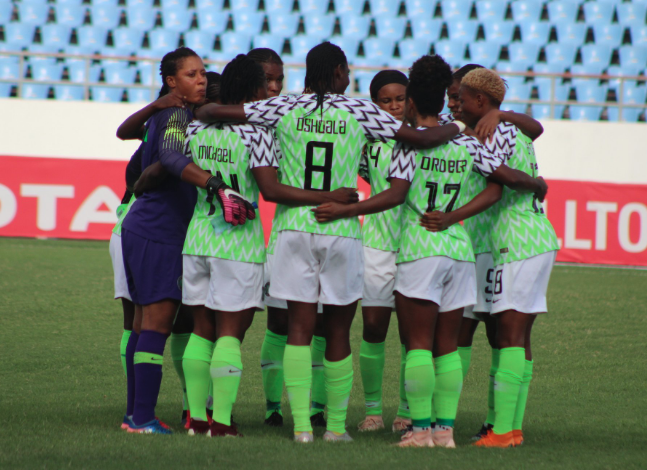 The Super Falcons of Nigeria on Wednesday evening in Cape Coast rekindled their World Cup hopes by trashing surprise package Zambia 4-0 to earn their first win in the Africa Women’s Championship, AOIFootball.com reports.
Having lost her first game to South Africa on Sunday, the Nigerians came into the clash with purpose but failed to make their early domination count as they spurned a couple of chances in the opening exchanges.
The Thomas Dennerby- led girls did, however, get the much-needed goal when winger Francisca Ordega set up striker Desire Oparanozie to put them ahead after 41 minutes.
After a plethora of misses in the second half with Asisat Oshoala the clear culprit, the Falcons doubled their lead via the boots of the impressive Ordega after Oparanozie’s strike came off the upright.
Substitutes Rasheedat Ajibade and Amarachi Okoronkwo made it three and four with Rasheedat scoring a screamer that saw the ball come in off the underside of the bar and Okoronkwo finished beautifully after picking up a loose ball from a corner kick.
Next up for Nigeria is their final group game against already eliminated Equatorial Guinea on Saturday after they lost their second consecutive game against South Africa late Wednesday evening.