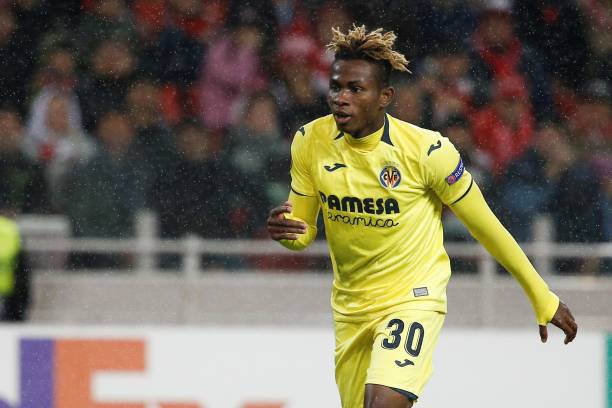 Nigeria’s new wonder kid, Samuel Chukwueze continued his impressive rise in the Spanish LaLiga as he scored what proved to be the winning goal for Villarreal in their vital 2-1 win at home to Real Betis that takes them off the relegation zone, AOIFootball.com reports.
Still smarting from his first senior debut for Nigeria, the 19-year-old kept his place in the starting eleven following his impressive display against Rayo Vallecano prior to the international break, but the first half was more of a cagey affair with Manuel Morlanes injury the talking point as both teams went into the break level.
However, the second half burst into life with Villarreal scoring two quick goals, first when Gerard Moreno headed in an inch-perfect corner kick from Santi Carzola on 52 minutes before Nigeria’s Chukwueze fired in a deadly left footed shot two minutes later after Santi Carzola again set him up with a back flick.
Betis did score what proved to be a mere consolation on the dot of 90 minutes via the boots of Giovanni Lo Ceiso but it was the home side who held on for their third victory of the season.
With his strike, 19-year-old Chukwueze has now scored two goals in two matches for Villarreal and three in all competitions, having just played 7 professional matches since his promotion from the B side.
The win m lifts Villarreal off the relegation zone for the first time this season and they now occupy 16th position with 14 points from 13 games.