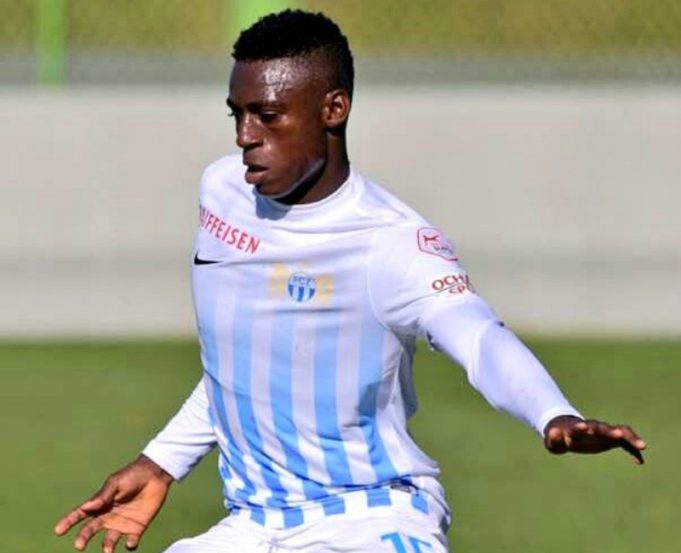 It was a relatively quiet outing for Nigerian players in the UEFA Europa League with none finding the back of the net.
However, there was a debut for 17-year-old Nigerian Bukayo Saka who came on for the Gunners in their 3-0 win away in Ukraine, whilst Samuel Kalu gave a good account if himself under the watchful eyes of Gernot Rohr who was present at the stadium in Bordeaux.
Stephen Odey: The former MFM star was on for the entire 90 minutes for FC Zürich in their 2-1 home loss to visiting AEK Larnaca. The result was however inconsequential because Zürich had already qualified to the next round.
Samuel Adegbenro: He was on for 78 minutes before being replaced by Jonathan Levi as Rosenberg lost their fifth consecutive group match going down 1-0 at home to Celtic.
Samuel Kalu and Peter Olayinka: With Eagles  Manager Gernot Rohr among the spectators at the Matmut Atlantique in Bordeaux, France, forward Samuel Kalu helped Bordeaux to a 2-0 win over Slavia Praha with Peter Olayinka a second-half substitute for the visitors.
The win earned Bordeaux their first win of the competition and they could still qualify on the final day should they win at Kobenhaven and Slavia Praha fail to win at home to already qualified Zenit.
Francis Amuzu: The midfielder was a second-half substitute replacing Knowledge Musona with 9 minutes of regulation time left in Anderlecht’s goalless draw at home to Sortak Tranava.
Bukayo Saka: 17-year-old defender Bukayo Saka became Arsenal youngest player to debut in the Europa league when he replaced Aaron Ramsey in the 68 minutes of Arsenal comfortable 3-0 win over Vorskla Poltava in Ukraine.
Alex Iwobi did not travel with the Gunners squad for the match.
Samuel Chukwueze: The Eagles forward was named among the substitute but was introduced after 74 minutes for Pablo Fornals as Villarreal played out a goalless draw away at Glasgow Rangers.
Uche Agbo: The Eagles midfielder was confined to the bench for the entire match duration as Standard Liege boosted their chances of making it into the knock out stages by defeating Sevilla 1-0 at home.