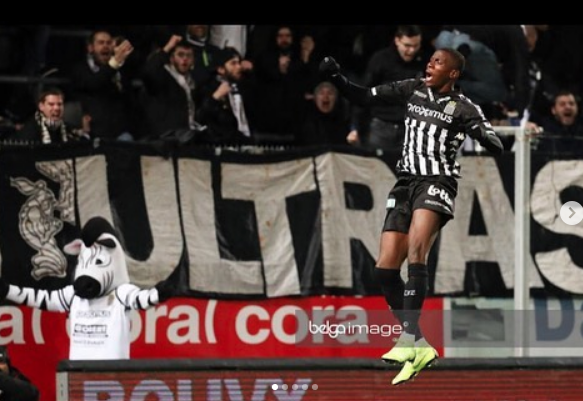 Super Eagles’ forward, Victor Osimhen continued his impressive form, scoring in his second consecutive league game to help RC Sporting Charleroi to a 3-1 win over Club Brugge in the Belgium  Pro League, AOIFootball.com reports.
A Cristian Benavente strike in the 16th minute made the difference with Charleroi going into the break with a 1-0 lead.
Osimhen then doubled his side’s lead eight minutes after the restart after converting from a Cristian Benavente pass to score his 7th league goal and hand Charleroi a comfortable 2-0 lead.
Marco Ilaimharitra then made it 3-0 after the hour mark before Osimhen was withdrawn with Adrien Bongiovanni scoring a late consolation for the visitors with Charleroi running out with all three points.
The win lifts Charleroi to 7th on the league table with 26 points from 17 games, whilst Osimhen now leads the club scorers chart with 7 goals from 9 starts, 4 behind overall league leader Ivan Santini who has 11 goals.