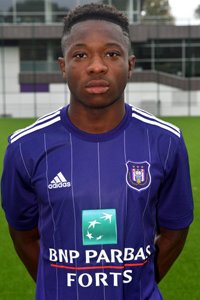 Ghanaian youngster, Francis Amuzu scored his first goal of the season to help Belgian club Anderlecht to a 1-1 draw at home to Royal Sporting Charleroi which had Victor Osimhen on for the entire match duration, AOIFootball.com reports.
Having broken into the first team in January, the 19-year-old who also has Belgian citizenship started his 10th league game of the season and his 13th overall and he impressed in the heart of the midfield as both teams went into the break deadlocked.
It, however, took Amuzu two minutes to register his name on the scoresheet early in the second half.
Their joy was however shortlived one minute from time when Cristian Benavente equalized from 12 yards to deny the young Ghanaian a chance of being the hero of the night.
The draw leaves Anderlecht still within the distance of leaders Gent on 4th position on the log with 31 points, four points and four places above Charleroi which remain in 8th position with 27 points after 18 round of matches.