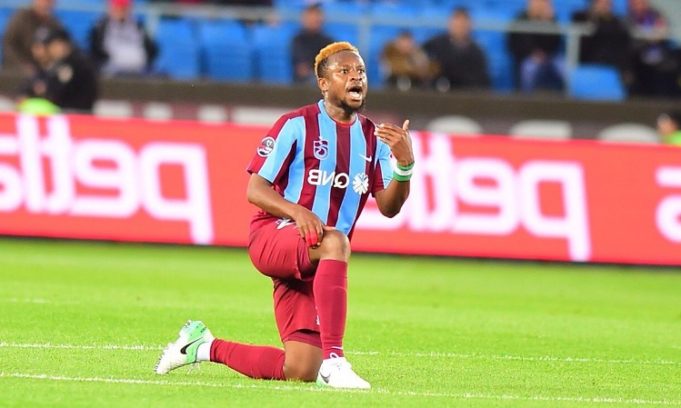 Nigerian players plying their trades abroad had an impressive weekend, with the biggest being Eagles’ midfielder, Ogenyi Onazi who returned from injury to score a goal, whilst Blessing Eleke continues to do well in Switzerland.

Leon Balogun: He started his second league game of the season for Brighton in their 1-0 loss away at Burnley.

Wilfred Ndidi, Kelechi Iheanacho: Ndidi was on for the entire match duration whilst Iheanacho was replaced in the second half as Leicester City lost 2-0 at home to Tottenham

Alex Iwobi: The Gunners star came off the bench at halftime replacing Stephan Lechtsteiner in Arsenal 1-0 win over Huddersfield.

Semi Ajayi: He was on for the entire match duration of Rotherham United 2-2 draw away at Sheffield Wednesday.

Emeka Eze: He fired blanks before been replaced in the 77th minute of SK Strum Graz goalless draw away at Rapid Wien.

Victor Osimhen:  Royal Sporting Charleroi had Victor Osimhen did not get on the scoresheet but was on for the entire match duration in their 1-1 draw against Anderlecht.

Taiwo Awoniyi and Anderson Esiti: Both players were in action for KAA Gent as they defeated KAS Eupen 2-0 at home.

Goodness Ajayi: He was on for the entire match duration but could not inspire Inter Zapresic to a win as they lost 2-0 at home to Dinamo Zagreb.

Iyayi Believe, Godfrey Oboabona, and Ezekiel Henty: All three Nigerians were in action but it was Henty and his NK Osijek side that stole the day as they defeated HNK Gorica 2-1.

Peter Olayinka: H e scored his fourth goal of the season netting what proved to be the winning strike for Slavia Praha in their 3-2 win over Mlada Boleslav.

Ubong Ekpai: He came off the bench in the second half replacing Milan Petrzela in Viktoria Plzen 2-0 win away at Fastav Zlin.

Anthony Ujah: He came off the bench in the second half to help FSV Mainz 05 earn a draw at home to Hannover 96.

Jamilu Collins: Was in action for Paderborn as they lost 1-0 to Hamburger SV.

William Troost-Ekong: He was on for the entire match duration but was helpless as Udinese lost 3-1 at home to Atlanta.

Ola Aina: The wing-back was on for the entire match duration impressing in Torino’s goalless draw away at AC Milan.

Joel Obi: He was on from start to finish, helping Chievo Verona earn an impressive 1-1 draw away at Parma.

Mikel Agu: He was on for the entire match duration. He was superb in the middle of the pack for Setubal despite their 1-0 loss in the hands of Benfica.

Kelechi Nwakali and Musa Yahaya: Nwakali came off the bench in the closing stages of FC Porto B 3-0 win over Academica Coimbra; Yahaya was not listed for the clash.

Ahmed Musa: The Eagles’ stand-in captain was on for the entire match duration of Al-Nassr’s 2-2 draw away at table-toppers Al-Hilal Saudi.

Blessing Chibuike Eleke: The 22-year-old scored twice for FC Luzern netting the winner in their 3-2 win away at Grasshopper Club Zurich.

Stephen Odey: The former MFM striker fired blanks for FC Zurich as they lost 2-0 away at Basel.

Kenneth Omeruo: The Eagles’ defender featured for 90 minutes, helping Leganes to a 1-1 draw at home to Getafe in a derby match played on Friday.

Samuel Chukwueze: The young forward was on for 55 minutes before being replaced by Carlos Bacca in Villarreal 2-3 loss at home to Celta Vigo.

Francis Uzoho: The Eagles number 1 returned to action for Elche keeping a clean sheet in their goalless draw at home to Sporting Gijon.

Ramon Azeez: The former flying Eagles star was in action for the entire match duration of CD Lugo 4-2 win over Las Palmas.

Aminu Umar and Henry Onyekuru: Umar was on target for the second consecutive match for Rizespor in their comeback 2-2 draw away at Galatasaray who had Henry Onyekuru on for 77 minutes.

Ogenyi Onazi and Anthony Nwakaeme: Onazi returned to action with a bang for Trabzonspor scoring his side third goal in their 3-0 bashing of Konyaspor. Nwakaeme also featured in the clash.