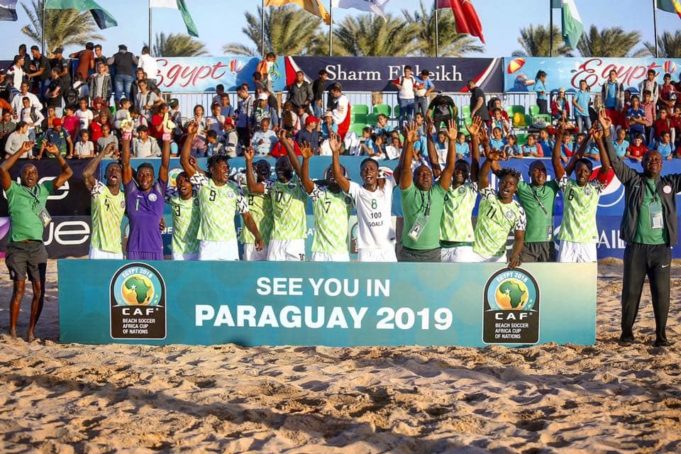 Veteran player Abu Azeez scored four goals for the Super Sand Eagles of Nigeria as they edged hosts Egypt 7-6 in the first semifinal of the ongoing Beach Soccer AFCON to not only reach the final, but also clinch a place at the 2019 World Cup in Paraguay, AOIFootball.com reports.
Abu Azeez put the Eagles ahead through his 100th goal for his country after a period of high pressure from the men in green before Taiwo ran on to a long pass to arrow a low shot past Mohamed Fawzy in the Egyptian goal to double Nigeria’s lead.
Trailing by two already, the hosts had to come up with something soon to stop the previous edition’s runners-up. And they did exactly that when Moustafa Aly drove a freekick home to pin Nigeria back to just one goal ahead.
The crowd revitalized, Egypt kept up the attack but were defended furiously to make sure that the first period ended 1-2.
When the second period started, Egypt were looking the more dangerous of the sides and Paul, the Nigeria goalkeeper, was kept busy, pulling off some impressive stops. But another goal eluded them, until Costa found a sliver of space to pelt a low shot into the corner, giving Paul no chance this time.
Aware of their dominance, Egypt were moving over the sand with confidence, but when Ogbonna sent a cleanly-hit chip into the top corner, Nigeria were leading once more. Abu then made it 2-4, grabbing his second of the day. But Samir, a minute after missing a penalty, dragged Egypt back once more, by scoring a freekick.
The third period got underway with the hosts just one behind Audu Ejo Adamu’s men. As Abu completed a hat-trick, Samir was there, once more, to volley home after a sublime piece of teamwork, and the difference remained the same.
And then, a penalty, and the chance to draw level. Mohamed stepped up, took a deep breath and powered the shot past Paul to equalize 5-5!
With the prospect of a place in the FIFA World Cup ahead of them, Egypt were throwing everything they had at the Nigerians who were suddenly looking vulnerable, lunging into tackles and giving away valuable freekicks.
Abu picked the defender’s pocket to take the lead yet again, but just a minute later Egypt were level when Mohamed scored a beauty of an overhead.
Extra time was snatched cruelly from them, when more defensive complacency saw Ogbonna nick the ball, calmly finish and take the game 6-7 for Nigeria.
The Audu Adamu- led boys will now await the winner between Senegal and Morocco to determine who they will meet in the final on Saturday.