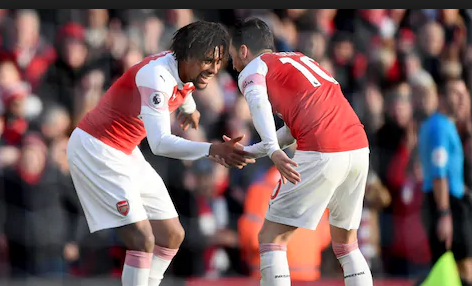 Super Eagles’ Alex Iwobi came off the bench to score his second Premier League goal of the season as the Gunners returned to winning ways by defeating Burnley 3-1 at the Emirates Stadium on Saturday, AOIFootball.com reports.
The Nigerian was one of six changes made to the squad that lost midweek to Tottenham whilst another Nigerian Bukayo Saka was also named on the bench by Unai Emery.
The Gunners took the lead going into half time through Pierre-Emerick Aubameyang in the 14th minute.
The Gabonese international then added a clinical second on the counter on the 48tg minute to take his tally to 12 for the season before Ashley Barnes reduced the deficit for the visitors three minutes after the hour mark to make it 2-1 and set up a nervy finish to the encounter.
Iwobi was then introduced with 12 minutes of normal time left, replacing Alexandre Lacazette and the substitution proved to be a masterstroke as the Nigerian netted a late third, one minute into additional time to seal the Gunners’ three points.
Despite playing for just twelve minutes, the 22-year-old still had a decent game rating of 7.4, completed 67% of his passes, made one key pass and also won 100% of his tackles.