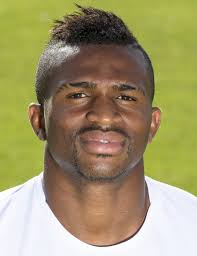 Nigerian international, Christian Irobiso was in imperial form on Sunday afternoon for his Portuguese Segunda division side as he scored one and assisted another in SC Farense’s 3-2 win away at Panafiel, AOIFootball.com reports.
The 25-year-old, assisted Fabio Nunes on the 7th minute to give the away side the lead before Fabio Nunes returned the same favour by setting up the Nigerian to double Farense’s lead four minutes after the half hour mark before Pires halved the deficit three minutes later and the away side led 2-1 going into the break.
Fabio Nunes then made it 3-1 ten minutes after the restart before Fabio Abrelio reduced the deficit again but Farense held on for an impressive 3-2 win.
Similarly, on Saturday, former U-17 World Cup winner Musa Yahaya came off the bench to get an assist for FC Porto B as they defeated SC Covilha 3-0, with Chidozie Awaziem playing the entire duration of the match for Porto B.
Having failed to break into the Porto main team, Awaziem featured in his second consecutive B team match with Yahaya and Nwakali named among the substitutes.
With FC Porto B one goal up, Yahaya was introduced in the 34th minute before Marius Mouandilmadji scored from 12 yards, two minutes before the break to give Porto a 2-0 lead going into the break.