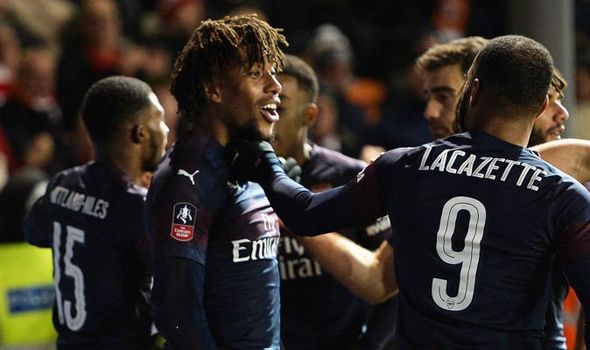 It was a relatively good outing for Nigerian players in the English FA Cup as Alex Iwobi scored his third goal of the season whilst there were starts for the duo of Leon Balogun and Oghenekaro Etebo. Victor Moses was, however, a surprise name on the Chelsea bench as he edges closer to an exit from the club.
ALEX IWOBI: The Gunners star continued his impressive form and was directly involved in one of the goals for Arsenal for the third consecutive match when he netted their third in a 3-0 win over League One side Blackpool.
The 22-year-old was a constant threat for the Gunners as they progress to Round 4 and was a huge factor in setting up the second goal after combining well with Sead Kolasinac on the flanks.
He was withdrawn for Bukayo Saka who made his FA Cup debut.
LEON BALOGUN: The Eagles’ defender returned to the starting lineup in place of Lewis Dunk and partnered Shane Duffy in the heart of the Seagulls defence as they defeated Bournemouth 3-1 at the Vitality Stadium to advance to the Round 4 for the 9th time in 10 seasons.
Balogun was every present to scuffle any attack from the Cherries as goals from Anthony Knockaert, Yvves Bissouma and Florin was enough for Chris Hugton and his lads to progress.
OGHENEKARO ETEBO: He started his first game since returning from suspension to help Stoke City force a reply as they drew 1-1 away at League One side Shrewsbury Town.
The hosts took the lead on the stroke of half-time when Oliver Norburm truck home from 12 yards before substitute Peter Crouch ensured there was no upset for Stoke when he equalized to force the tie into a replay.
VICTOR MOSES: The former Eagles’ winger returned to the Blues squad for the first time in almost three months but was an unused substitute in their 2-0 win over Nottingham Forest at Stamford Bridge.
The former Wigan winger continually linked with a move away from the London club before the end of the transfer window after falling down the pecking order since the arrival of new boss Maurizio Sarri.
SONE ALUKO: The former Eagles’ star was a half-time substitute for Reading but could do little to influence the rest with his side falling 2-0 to Manchester United at the Old Trafford.
With Reading already losing 2-0 from the first half, Aluko came on for Tiago Illori and missed a golden opportunity to half the deficit for his side as Manchester United claimed their 5th consecutive win under their new manager.