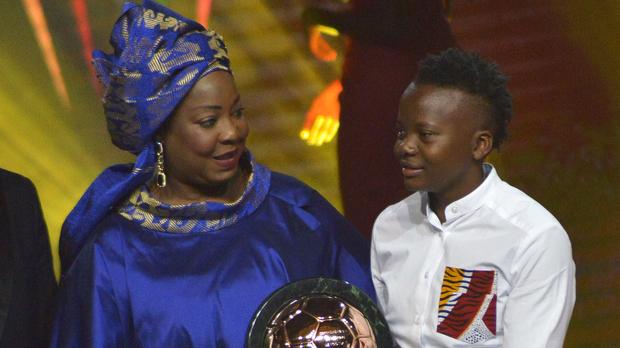 In what was a relatively poor outing for Nigeria at the 2018 Aiteo CAF Awards, the Super Falcons of Nigeria, were named Women’s Team of the Year, AOIFootball.com reports.
The Falcons beat off competition from South Africa to emerge winners on the night, whilst Banyana Banyana Coach Desire Ellis beat her Nigerian counterpart Thomas Dennerby to emerge Women’s Coach of the Year.
The biggest moment of the night, however, saw South African forward Christian Thembi Kgatlana emerge as the new Queen of the continent, dethroning reigning champion and three-time winner Asisat Oshoala as well as Francisca Ordega to emerge the winner.
In the men’s category, there was no surprise at all as Mohammed Salah retained his title, beating Liverpool teammate Saido Mane and Arsenal’s Pierre Emerick Aubameyang to win it back-to-back.
Other winners on the night include Achraf Hakimi who edged out Wilfred Ndidi to scoop the Young Player of the Year, whilst Mauritania was named the National Team of the Year for male, while Morocco’s Herve Renard scooped the Coach of the Year Award.

Shooting Stars will not be relegated, says Jimoh