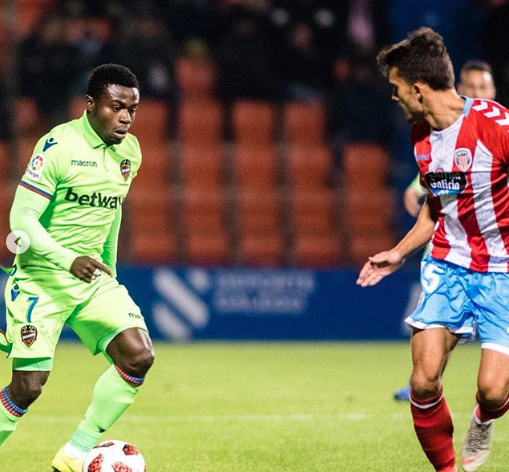 Super Eagles’ winger, Moses Simon is set for his third cup start when his Levante side host defending champions Barcelona at the Cuitat de Valencia in Thursday night’s first leg round of 16 clash, AOIFootball.com can authoritatively confirm.
Having started in previous rounds against Rayo Vallecano and CD Lugo, the pacey winger will hope to continue his impressive cup run for the Paco Lopez led boys.
The match could come as a good omen for the 23-year-old forward who will be keen on impressing the coach ahead of the second round of the league which begins this weekend.
Simon joined Levante from KAA in the summer for a fee of around 5 million pounds but has found playing time limited, featuring in five LaLiga games and two Copa del Rey matches as he continued to await his first start in the league.
He would however hope for a much better outing against Barcelona in the cup after the duo of Samuel Chukwueze and Kenneth Omeruo failed to win with their respective sides on Wednesday, although both players were rested during the clash.