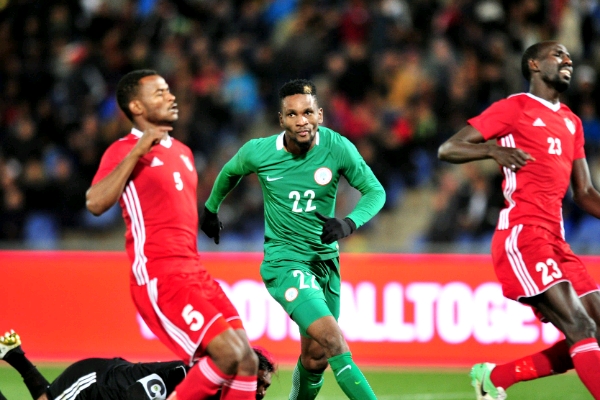 Super Eagles’ forward, Gabriel Okechukwu is on the verge of joining modest Morrocan club, Rapide Oued Zem on loan from Wydad Athletic Club after the player was spotted in Rapids on Thursday night, AOIFootball.com can authoritatively confirm.
Okechukwu, 23, has struggled for game time since his arrival at Wydad in August, but the return of former coach Benzarti further limits the chances of the former Akwa United forward breaking into the first team in Wydad.
Though no official statement has been made by the player or the clubs involved, Morocco-based reporter Ashraf, who has been monitoring the player’s situation for AOIFootball.com, stated that the player will most definitely join the club in the coming days as the transfer formalities are almost being sealed.
The 2018 CHAN Eagles’ star is expected to attend Oued Zem’s league game on Saturday against Olympique Khoribga and could be unveiled this weekend.
This development now means Okechukwu will most definitely not be a part of Wydad’s CAF Champions League quest this season and will also miss a potential reunion in Nigeria against Lobi Stars.

No panic over the ‘Ikeme situation’, says Sanusi