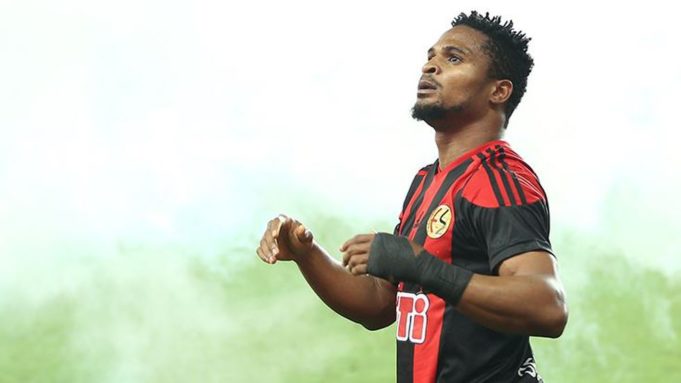 Nigerian forward, Chico Ofoedu scored his fifth league goal for Maccabi Tel Aviv as they drew 1-1 away at Hapoel Tel Aviv on match day 18 of the Israeli Premier League, AOIFootball.com reports.
The 26-year-old started just his 7th league game of the season for the runaway leaders who are set to clinch their first league title in four years after still maintaining their unbeaten run into the second half of the season.
The former Enugu Rangers forward put his side in front two minutes after the half hour mark when he converted from  a Yonatan Cohan assist to make it 1-0 before going into the referee’s book six minutes later for a needless foul.
With the result almost in the bag for the league leaders, the Nigerian was replaced by Itay Schechter after 75 minutes but the substitute lasted just six minutes on the pitch as he was given his matching orders after a rash challenge.
The home side then capitalised on their numerical advantage and deservedly equalised through Ghanaian forward Emmanuel Boateng, twelve minutes from time to ensure both teams settled for a share of the points.
The draw stretches Maccabi’s lead on the table to 46 points, 16 points ahead of second placed Bnei Yehuda who currently have 30 points from 18 games played.

Dream Team gets Nwakali boost ahead of Sudan return leg