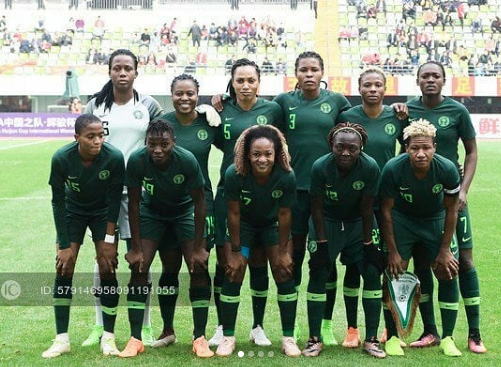 Nine times African Champions, the Super Falcons of Nigeria on Sunday in far away Wuhua China made amends for their opening day loss to China by thrashing Romania 4-1 to finish third at the four nations invitational tournament, AOIFootball.com reports.
After a disappointing 3-0 loss to host China on Thursday, Head Coach Thomas Dennerby made four changes to the team with the likes of Ordega, Ajibade and Nandozie coming into the starting XI whilst Oluehi, Okobi, Uchendu, and Chukunonye were all dropped.
Clearly, in search of their first win against European opposition in years, the Falcons dominated the early exchanges but found it difficult to break a strong Romania backline.
However, with the half time whistle drawing close, forward Chiwendu Ihezuo put the Nigerian ladies ahead one minute to half time much to the joy of the Falcons’ bench.
The Romanians then came out in the second half and got their equalizer from the run of play in the 55th minute, but captain Onome Ebi restored Nigeria’s lead eight minutes afterward when she scored to put the Falcons 2-1 up.
Midfield maestro Rita Chikwelu then made it 3-1 on the 68th minute before returnee Ini Umotong came off the bench to make it 4-1.
The team will now return to Nigeria to continue their preparation ahead of the Women’s World Cup in France. They will also head to Cyprus next month for the Cyprus Women’s Cup.