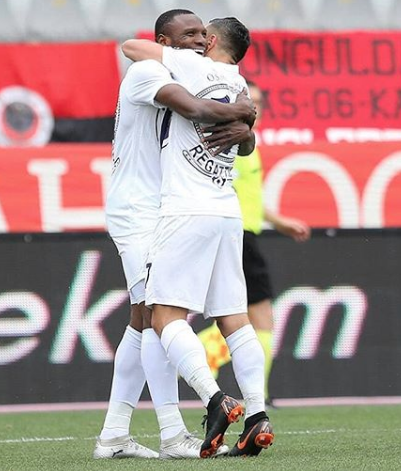 Nigeria international, Aminu Umar hit the ground running in 2019, as he scored the winner for bottom-placed Caykur Rizespor in their 1-0 win over Kasimpasa, AOIFootball.com reports.

The 23-year-old, who is on loan from Osmanlispor, started his 16th league game of the campaign with the visitors desperately searching for points to improve their position.

The Nigerian however, put his side ahead after 23 minutes when he received a pass from Vedat Muriqi before he unleashed a ferocious strike past the helpless Ramazan Kosë to give the visitors the lead going into the break.

Despite dominating most of the second half, the hosts failed to find the equalizer after losing their talismanic goals scorer Mbaye Diagne through suspension.

Umar was then replaced after 78 minutes to a standing ovation from the visiting fans as Rizespor held on to claim their second win of the season, still languishing the bottom on the log.

The Rio 2016 Olympic bronze medalist was adjudged man of the match, earning a game rating of 8.4, completing 67% of his passes, winning 10 duels and also completing 100% of his tackles.