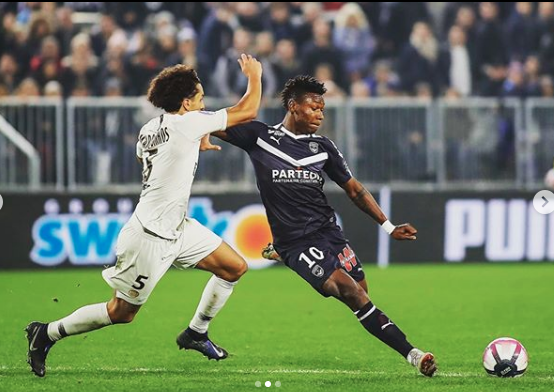 Super Eagles’ forward, Samuel Kalu has been included in the French Ligue 1 Team of the week for match day 20 after the Bordeaux winger delivered a match-winning performance in their 1-0 win against Dijon on Sunday night, AOIFootball.com reports.
The Nigerian has been in superb form since the turn of the year, scoring twice and creating one assist in four matches to help his side still remain with a fighting chance for European football for next season.
Kalu helped set up the winning goal for Danish forward Andres Cornelius after skipping past his marker before squaring for his teammate to tap into an empty net.
Having being given a match rating of 8.4, the Nigerian joins a star-studded XI which includes 5 PSG players who made the cut after their impressive 9-0 humiliation of Guingamp, with Toulouse also producing two players whilst Lyon, Strasbourg, and Angers contributing also.
Ligue 1 Team of the Week
Anthony Lopes (Lyon)
Thilo Kehrer (PSG)
Kelvin Amian (Toulouse)
Christopher Jullien(Toulouse)
Manceau Vincent (Angers)
Samuel Kalu (Bordeaux)
Angel Di Maria (PSG)
Neymar (PSG)
Anthony Caci (Strasbourg)
Kylian Mbappe (PSG)
Edison Cavani (PSG)