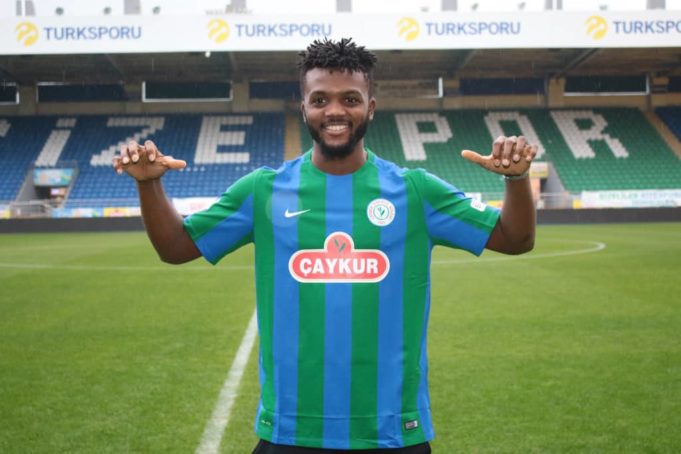 Super Eagles’ defender, Chidozie Awaziem has ended his nightmarish six-month career at Portuguese side FC Porto after completing his move to Turkish club Caykur Rizespor on loan, AOIFootball.com reports.
The 22-year-old struggled for playing time on his return to the club following his loan outing last season with Nantes and had just two appearances with the first team before being demoted to the B team.
He will now join up with another Nigerian Aminu Umar at the relegation strugglers, as he adds to the growing list of Nigerian players plying their trade in the Turkish League.
Speaking to the media shortly after his unveiling, the 2018 World Cup player revealed that he had other offers from several clubs but decided to join the club after speaking with the club’s management.
“I’m happy about the confidence they have on me and I’m honoured to be here. There were other clubs, I had the options to chose otherwise but Rizespor showed great interest and after the call from the director and coach I decided to come here because the conditions are good for me.
“I’m ready for the challenge ahead. I saw the game yesterday against Kasimpasa, everyone was hungry to win which even makes me hungrier to help and start playing here,” Awaziem said.
He concluded by saying that he hopes to continue flying the flag of the country in the Turkish League as there are a host of Nigerian players in the country and also hopes to keep the club from going on relegation.

Succeeding in Russia would be phenomenal, says Rohr