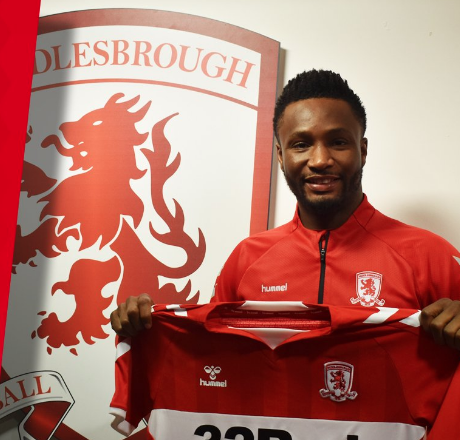 Mikel rose to prominence in an 11-year stint with Chelsea, making nearly 400 appearances for The Blues and winning a host of honours including two Premier League titles and the Champions League.

After captaining his country in the 2018 FIFA World Cup, the 31-year-old most recently plied his trade in the Far East with Tianjin TEDA. He returns to English football with Boro having been a free agent since the end of the Chinese Super League season in November.

Reports had linked Mikel with a host of European clubs including AS Roma and Wolfsburg as well as sides in the English top flight and the Championship, but the midfielder has opted to join The Teessiders in our bid for promotion.

Boro boss Tony Pulis was delighted to complete the signing of Mikel and he said: “I’m pleased to get him in. He is a man with a lot of experience and quality.

“He has a winning mentality and he wants to be here be a part of what we are looking to achieve.”

Mikel becomes Boro’s second addition of the January transfer window, following the arrival of Rajiv van La Parra on loan from Huddersfield earlier in the month. He will wear the number 2 shirt.