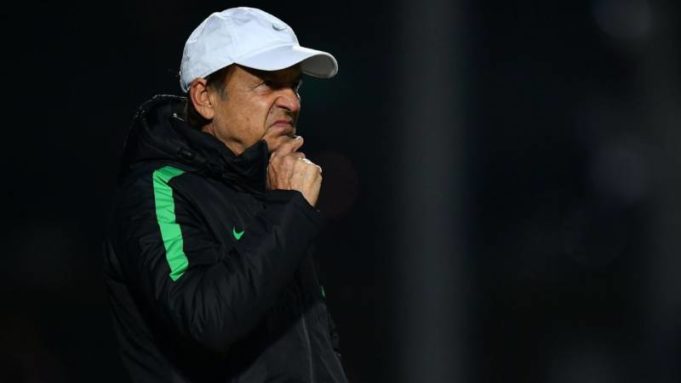 Nigeria international, Kelechi Nwakali has praised Super Eagles’ gaffer Gernot Rohr’s tactical prowess, whilst expressing confidence in his ability to lead the team to success at the Africa Cup of Nations in Egypt this year, AOIFootball.com reports.
Having worked with the Franco-German last year, the 20-year-old said he remained thankful for the advice and technical knowledge he gained from him, stating that he is a coach every player will want to work with.
“He is a great coach who understands the game well and always wants to get the best out of his team. He received me well and that really gave me confidence playing with the team,” Nwakali stated.
Though Nwakali has been overlooked by the Eagles gaffer for Nigeria’s last four matches after his full debut against Liberia in September, he remains thankful for the opportunity and hopes he gets to work with the German again.
Nwakali caught the eye of Rohr in Uyo when he shone for the B team against Atletico Madrid before getting his first call-up for September’s qualifiers against Seychelles.
With Rohr confirming he would invite new players for Nigeria’s the dead rubber qualifier against Seychelles, the Porto midfielder could fancy a chance to return to the national team, following his recent performance with the Porto B team.

Q and A with Michael Babatunde: This Super Eagles set-up is fantastic, I want...