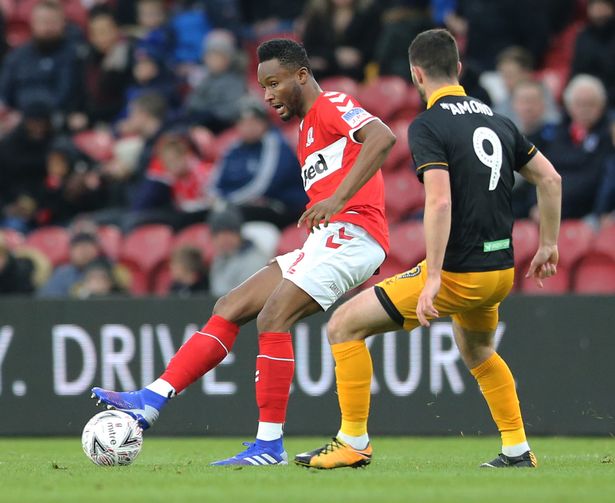 Super Eagles’ captain, Mikel John Obi was at his commanding best as he marshaled Middlesbrough’s midfield for the larger part of their 1-1 draw at home to Newport in the FA Cup Round 4 tie played at the Riverside Stadium.l, AOIFootball.com reports.
Mikel recently joined the Championship side on Thursday and went straight into the starting XI, playing as they anchorman in a four 4-1-4-1 formation for the home side.
After an eventful first 45 minutes which saw both sides dominate each other, Boro took the lead six minutes after the restart when Daniel Ayala headed in a Lewis Wing corner kick.
Mikel was then withdrawn two minutes after the hour mark for Adam Clayton as he received rounding applause on his way to the bench.
The substitution did, however, prove costly as Middlesbrough conceded a late equalizer when substitute Mathew Dolan scored in injury time to force a replay for the League One side.
Mikel did, however, show his class in the match, earning a game rating of 7.1, completing 86% of his passes, making one key pass and winning six of his seven duels. He also showed his defensive strength by winning two of his four tackles, making one clearance and also one interception.
Photo: Gazette Live