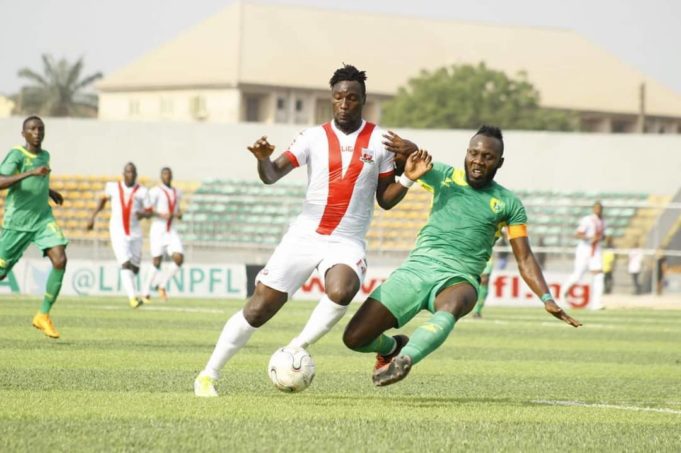 The Nigerian Professional Football League (NPFL) entered day 5 on Sunday with continental teams Lobi Stars and Enugu Rangers showing top form as they both grabbed their first wins of the season.

FC Ifeanyi Ubah and Sunshine Stars also continued the trend of away wins as they picked up maximum points at Kada Stars and Wikki Tourists, AOIFootball.com reports.

At the Cathedral, Aiteo Cup champions Enugu Rangers earned their first win of the season as they edged out Enyimba of Aba 1-0 in the first Oriental Derby to momentarily move off the bottom of the table.

A first-half strike from Ajani Ibrahim was all the Enugu side needed to confine Enyimba to their second defeat of the season.

In Benue, CAF Champions League representative Lobi Stars made light work of Kwara United, defeating them 3-0 to earn their first win of the season.

This was courtesy of a first-half brace from Ivorien striker Yaya Kone and Michael Stephen.

At the Abubakar Tafawa Balewa Stadium in Bauchi, Sunshine Stars defeated Wikki Tourist 1-0 to record their first away win of the season. Chibundu Amah grabbed the all-important away goal ten minutes from time

In Minna, Niger Tornadoes continued their abysmal form at home as they failed to win at Bako Kantangora Stadium in Minna. It was their third straight league game after playing goalless with Bendel Insurance. Isah Azado missed a penalty for the Minna side.

At the Liberation Stadium in Port Harcourt second-half own goal from Austin Opara earned Rivers United their first win of the season at home to MFM.

In group B, Abia Warriors failed to build on their midweek win against Kada City as they drew goalless at home to visiting Gombe United at the Umuahia Township Stadium.

Same scoreline was recorded in Lafia as Kano Pillars earned their first point on the road playing out a goalless draw against Plateau United who were playing in their adopted home in Lafia.

In Damaturu, Yobe Desert Stars earned their first win of the season against Heartland of Owerri as second half strike from James Odeh condemned Heartland to their second defeat of the season.

The final game of the day saw red-hot Ifeanyi Ubah maintain their perfect start to the season as they defeated Kada City 1-0 in Kaduna to record their third win of the season.

Second half strike from Chibuike Eze ensured FC Ifeanyi Ubah remained the only side yet to concede a goal in the NPFL after five games.