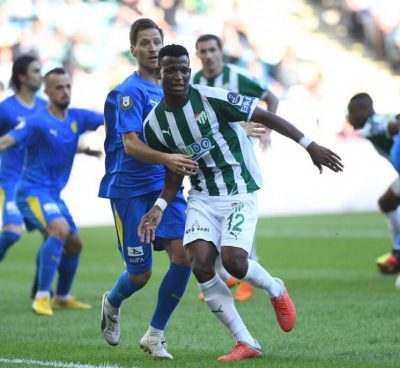 Super Eagles’ Abdullahi Shehu grabbed the headlines after returning to action for the first time in three months, in a weekend that was a relatively good one for Nigerian players in Turkey, AOIFootball.com reports.

ABDULLAHI SHEHU: The former Kano Pillars defender made his long-awaited return for Bursaspor in their 1-1 draw away at Kayserispor.

With the match level at 1-1, Abdullahi was introduced with ten minutes left for Tunay Torun as he made just his second appearance of the season.

HENRY ONYEKURU: The Everton loanee was on from start to finish but failed to replicate last week’s heroics as Galatasaray rallied to a 1-0 victory over Goztepe SK.

AMINU UMAR AND CHIDOZIE AWAZIEM: Aminu Umar continued his superb form for Rizespor as he helped setup the third goal in their 3-1 comeback win at home to Akhisarspor.

Chidozie Awaziem also made his Super Liga debut, coming on for Aatif Chahechouhe with nine minutes left, whilst Azubuike Okechukwu was not listed for the clash.

ANTHONY NWAKAEME: He was on for the entire match duration in Trabzonspor’s 1-1 draw away at Sivasspor. The visitors were still missing the services of mercurial midfielder, Ogenyi Onazi who his still recuperating from injury.

Dropping down the division former Ankaragucu striker, OLANREWAJU KAYODE made his debut for leaders Denizlispor as they trashed Adana Demirspor 5-1.

Having joined the club earlier in January, the 24-year-old replaced Mehmut Akyuz with 15 minutes left of normal time.

Abdullahi inspires Bursaspor to first win of the season