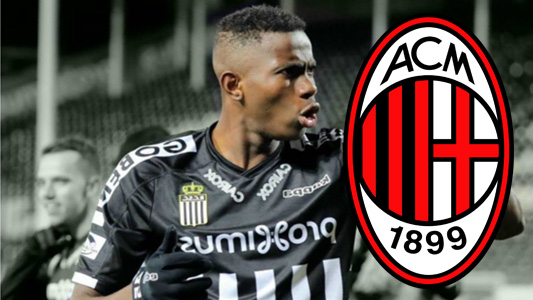 *Say Osimhen not in a hurry to leave Charleroi
Super Eagles’ forward, Victor Osimhen’s agents have confirmed he is strongly in talks with Italian giants AC Milan following impressive performances so far with Belgium club Sporting Charleroi, AOIFootball.com can exclusively report.
The player’s manager in Nigeria, Ariyo Igbayilola revealed to AOIFootball.com exclusively, that the interest in Osimhen is genuine and both parties are currently working on making it happen.
“I can confirm the interest on our player (Osimhen) is genuine. Like you know, I (Ariyo Igbayilola) and my partner Shira Yussuf, together with our foreign partners Jean Gerard Benoit Czajka, and his official agent in Europe: MATCHING SPORT and our very good friend Didier Frenay STAR FACTORY AGENCY), are all negotiating with AC Milan, but a lot of other clubs too are interested.
“We are not in a hurry because Victor is happy in Charleroi where he is doing very well. If some good opportunity for him is coming before the 31st of January, why not? If something good comes in the summer and Charleroi can buy him then sell him or he will come back to Wolfsburg to be sold,” Ariyo explained.
He, however, added that the player was not in any hurry to make a move as he remains focused on doing well and representing Nigeria at the 2019 AFCON in Egypt.
“There is no pressure on him; the most important thing is that he continues to play and prepare for the next AFCON with the Super Eagles,” Ariyo concluded.
Osimhen, 20, has been in red-hot form since his loan move to Charleroi from Wolfsburg, scoring 10 goals in 20 games for the Belgian side whilst he has also chipped in two assists.
His good form saw him return to the Super Eagles and was part of the team for the AFCON qualifiers against South Africa and the friendly against Uganda in Asaba.

Abdulquadir Adedapo - May 19, 2019
ALL CATEGORIES
SOUNDCLOUD