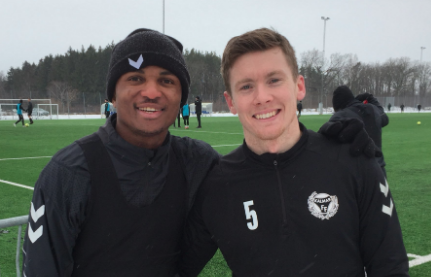 Nigerian midfielder, Chidiebere Nwakali has been handed the number 14 jersey by Kalmar FF ahead of the new Swedish League season which begins next month, AOIFootball.com can authoritatively report.
The 2013 U-17 World Cup winner joined the Swedish club last month and trained with the team all through last week ahead of their trip to Turkey for a preseason campaign.
Nwakali, who is excited by his performance in training so far, will, however, have to wait till next week Friday to make his debut for the club after Head Coach Magnus Pehrsson announced that he and Rafinha will not feature in Saturday’s test match against FC  Linköping.
“The new acquisitions Rafinha and Chidiebere Nwakali landed in Kalmar last weekend and have gone through their first training week together with their new teammates. However, they have to wait for the debut in the KFF jersey for another week.
“We have chosen to rest Rafinha and Chidiebere who both had the first week where we were cautious and limited their load. Therefore, we choose to rest them in the morning. Hopefully, the debut will take place next Friday when we play our first match at the camp against Arsenal Tula,” Magnus Pehrsson revealed.
The former Manchester City youth prodigy will, however, fly out with the rest of the squad to Turkey on Sunday as they begin their preparations for the new season.