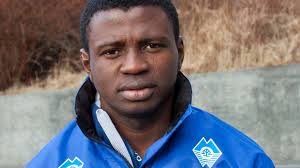 Nigerian defender, Akeem Latifu has joined Norwegian top-flight side Mjondalen on a free transfer after signing a two-year deal, AOIFootball.com reports.
The 29-year-old journeyman became a free agent last December after his contract with Sogndal whom he helped to a fourth-place finish expired.
His performance last season was however spotted by Mjondalen who have now added the experienced right back to their ranks ahead of their appearance in the Eliteserien after gaining promotion last season from the division one league.
Latifu’s performance at Hungarian side Budapest Honvéd last year had put him on the radar of Coach Gernot Rohr as the German struggles to find a long-term solution to the troubled right back position.
He has two caps for Nigeria at senior level and played all four matches for the Flying Eagles at the 2007 U-20 World Cup in Canada before the team was knocked out in the quarterfinals by Chile.