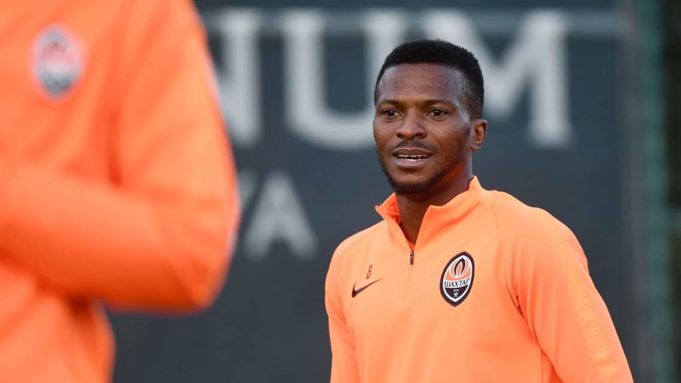 Super Eagles’ and Shakhtar Donetsk of Ukraine forward, Kayode Olanrewaju has revealed that he is happy to be doing what he knows how to do best after netting a brace in his side’s 6-1 friendly win on Monday, AOIFootball.com reports.

Despite struggling for form in the first half of the season, the former Manchester City player has found a new form this year, scoring three goals in two midseason fixtures.

He did tell AOIFootball.com exclusively afterwards, that he will continue to work hard and hopes everything falls in place for him and hasn’t also ruled out a return to the national team.

“I feel so good; this is my job and when you are doing great, you will always feel excited about it.

“I’m working hard generally as I want to be the best I can so things will fall into place. The coach however decides but I’m here to do my best,” Kayode said.

Having proved his goal-scoring prowess in recent weeks for the Ukrainian league leaders, the 25-year-old now hopes his form will convince head coach Paulo Fonseca to put more trust in him as Shakhtar continue to fight for both the league and Europa League trophy.

A peek through the Nwakali view glass