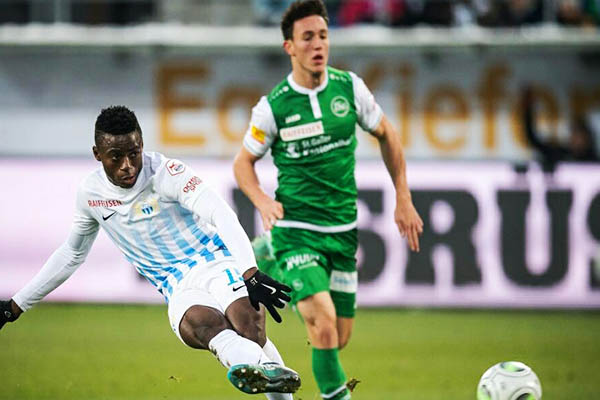 Nigerian international and FC Zürich striker, Stephen Odey has revealed he remains very much focused on scoring at least 15 goals before the end of the season as he prepares for the second round of the Swiss League, AOIFootball.com reports.
Having already surpassed his last season’s tally of two league goals, the 21-year-old remains determined to end the season on a  high following his first half exploits with the club in both the league and the cup competition.
“My target is 15 goals and more; it’s been a good season for me and I want to even do more to make it a better ending with my team,” Odey said.
The Nigerian has also been impressive during the mid-season period as he scored three goals in four friendlies.
“I’m absolutely ready for the game tomorrow because it’s going to be a very important one for us, we are just two points ahead of our opponent which makes it more crucial for both teams to try and get the needed point,” Odey added.
The former MFM star has been a revelation in Switzerland since his switch from the NPFL. He already has seven league goals and also scored twice in the Europa League and Swiss Cup with Zürich hoping to defend the Cup title they won last season.

Etebo picks Yobo, Kanu in his all-time Eagles 5-Aside