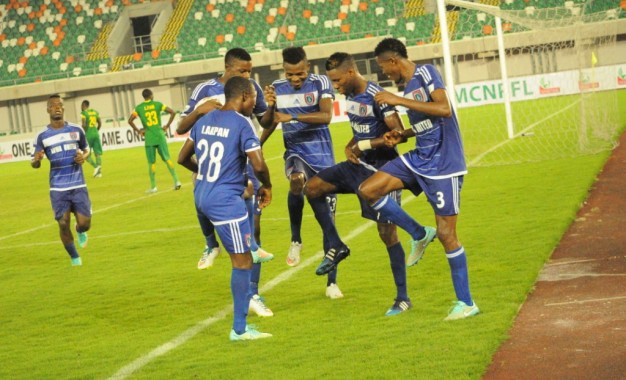 2017 Aiteo cup champions, Akwa United are beginning to get back their rhythm in the NPFL as they made light work of visiting Kada City by defeating them 4-0  at the Godswill Akpabio Stadium in Uyo, AOIFootball.com reports.
Still basking in the euphoria of their first away win against Yobe Desert Stars, the hosts took an early lead via the boots of Mfon Udoh on the sixth minute after tapping home easily when Kada City defence failed to clear their lines properly.
Akwa were then forced into an early substitution seven minutes later when captain Ubong Friday had an injury with Wisdom Fernando coming on as his replacement.
The host then doubled their effort ten minutes to half time when Ndifreke Effiong Slammed home a sumptuous cross from Etim Mathew to score his third goal of the season as Akwa ran into the break with a comfortable 2-0 lead.
The second half did continue as the first with the host mounting series of pressures but Mfon Udoh failed to convert.
With Kada City looking clueless in the encounter, first half substitute, Wisdom Fernando made it 3-0 in the 61st minute when his powerful strike from outside the box beat Sunday Okon in goal for Kada to put the game beyond the reach of the visitors.
Akwa were however not done as Ndifreke Effiong made it 4-0 four minutes later to score his second of the match and his 4th goal of the season to keep him level with teammate Mfon Udoh at the top of the scorers’ chart.
The visitors did, however, have a chance of their own late on but were denied by the woodwork as Akwa United recorded their third victory of the season and also their third straight clean sheet of the campaign.
The results see Rafael Everton and his boys move up to 4th on the table with 11 points, four points adrift of leaders FC Ifeanyi Ubah who have played a game more than the boys from Uyo.