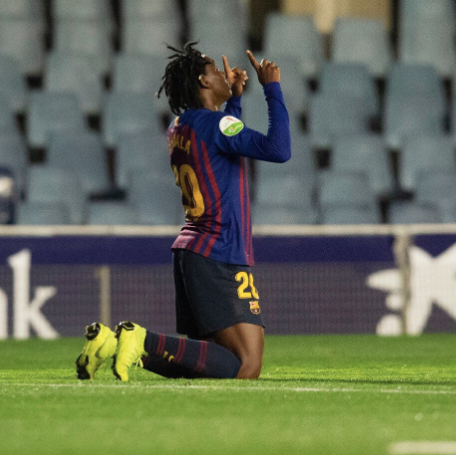 Super Falcons and FC Barcelona forward, Asisiat Oshoala has described her home bow for her new team as a bitter-sweet experience after scoring twice in their 2-3 shock home loss to Sporting Huelva, AOIFootball.com reports.
The 24-year-old arrived at the club on transfer deadline day and scored on her debut away at Rayo Vallecano after netting from her first touch in the match.
That performance earned her a slot in the starting XI and the three-time African Footballer of the Year did not disappoint as she put her side ahead in the 17th minute, firing home after the goalkeeper had spilled the ball to her direction.
However, the host were stunned in the second half as three quick-fire goals in the space of nine minutes put Sporting Huelva 3-1 up before Oshoala reduced the deficit six minutes from time after heading home from a corner kick.
The results see Barcelona suffer their first loss in the league this season, whilst for Oshoala it has been a perfect start to life in Spain with 3 goals from two matches played so far.
“Lost but glad to score 2 goals today. We keep fighting @FCBfemeni #AlhamdulilahAlways,” Oshoala posted afterward.